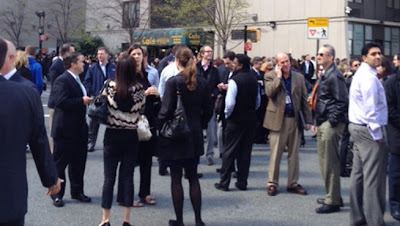 2 World Financial Center building is being evacuated because of a suspicious package, police said.

The package was delivered to 2 World Financial Center.

Police are investigating. Details are sketchy at this time but sources say what appears to be a grenade.

Update: Reuters) - A suspicious package that appeared to contain a grenade was found at 2 World Financial Center on Thursday morning, prompting an evacuation of the building, police said.

The evacuation was prompted around 11 a.m. EDT after an x-ray of a package at the building appeared to reveal a grenade inside, New York City Police Department spokesman Paul Browne said. The police department's bomb squad is at the scene.

Two World Financial Center was severely damaged by the falling debris when the World Trade Center towers collapsed in the September 11, 2001, attacks on New York. The building had to be closed for repairs until May 2002 as a result of the damage. (Reporting By Michelle Nichols and Barbara Goldberg; Editing by Vicki Allen)
Posted by Steve Douglass at 8:58 AM