New force of nature discovered? Is this the God Particle? 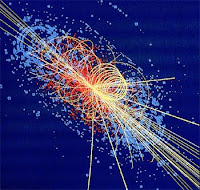 A particle accelerator in the US has shown compelling hints of a never-before-seen particle, researchers say.

The find must be more fully confirmed, but researchers at the Tevatron are racing to work through existing data.

If proved, it will be a completely new, unanticipated particle; researchers say it cannot be the much sought-after Higgs boson.

It could also signal a new fundamental force of nature, and the most radical change in physics for decades.

Researchers at the Tevatron formally announced the find on the collaboration's website, after posting an as-yet unreviewed account of the research on the Arxiv repository.

The team was analysing data from collisions between protons and their anti-matter counterparts antiprotons. In these collisions, particles known as W bosons are produced, along with a pair of "jets" of other particles.

It was in these jets that the unexpected "bump" in the team's data came to light, potentially representing a particle that the current understanding of the zoo of subatomic particles - the Standard Model - does not include.

"When you look at the data it's not some disagreement with the Standard Model, it's a nicely formed bump in the distribution that looks really like the kind of bump you'd get if a new particle was being exchanged in this process," said Dan Hooper, a theoretical physicist at Fermilab who was not involved in the research.

'Time will tell'
However, the result is at what is known as the "three-sigma" level of certainty; that means there is still about a tenth of a percent chance that the result is attributable to some statistical fluctuation in the data.

For a formal discovery, the level is traditionally taken to be five-sigma - or about a one-in-a-million chance that the "bump" is just a fluke. However, Dr Hooper said, the result comes from data taken at one of the Tevatron's two detectors, called CDF and DZero.


Results from the D0 detector should confirm or refute the find
"Even without running the machine one more day, they have roughly twice as much data at one of the two experiments, and if you include... DZero, then you have four times as much," he told BBC News.

That means that confirming the result more fully is simply a matter of working through the numbers the team already have to hand. Further, the coming experimental run at the Large Hadron Collider (LHC) should provide even more data to confirm or refute the new particle - whatever it is.

All that is clear is that the bump definitely does not represent the unwitting star of high-energy physics, the Higgs boson - the hunt for which has popularly been pitched as a race between the Tevatron and the LHC.

"If it's a real effect, rather than a fluctuation or a mismodelling of the background, it would be much more exciting than a standard model Higgs - or any type of Higgs," said Tony Weidberg, a physicist from Oxford University who works on the LHC's Atlas instrument.

However, he told BBC News that he did not "find this evidence very convincing", though he reiterated that a more definitive answer would be soon in coming.

"I've been doing this for 30 years now, and every few years we get these three-sigma effects - they come and then they go. Time will tell."

Dr Hooper is more optimistic on the basis of the current result alone.

"There's a 0.1% chance that this is a statistical fluke," he said. "Other than that possibility that lingers, this is the most exciting new phyiscs we've learned about in my lifetime."

If it is in fact true, Dr Hooper believes that the mystery particle represents an undiscovered "fundamental force".

"We'd essentially be saying there's a new force of nature being communicated by the particle. We know that there's four forces: electromagnetism, gravity, and the strong and weak nuclear forces. This would be the fifth; every freshman physics class would have to change their textbooks."