B-3 bomber shoots lasers - bust bunkers - mothership for a swarm of drones?

These add-ons, described by Air Force generals Philip Breedlove, William Fraser and David Scott, are meant to make the new bomber more lethal and harder to shoot down, even in the face of rapidly-modernizing air defenses such as China’s. “The purpose of this aircraft is to survive in an Anti-Access Area Denial environment,”Scott said, using the latest Pentagon term for defended airspace.

To that end, the bomber’s lasers might zap incoming missiles and fighters; the drones could fly ahead to scout and disable air-defense radars; the bunker-busters should ensure the bomber can actually destroy the enemy’s facilities once it breaks through the defenses.


With just $3.7 billion budgeted over the next five years to develop the bomber, lasers, bunker-busters, and drone-controls might seem unaffordable. And risky, considering the Air Force has said it must stick with “proven” technologies to keep the new bomber on-budget.

n fact, the bomber and its enhancements could be surprisingly far along the development process. The airframe itself might already be flying in prototype form, according to an investigation by ace reporter Bill Sweetman. Each of the add-on capabilities already exists, too, though not all in the same aircraft.

For years, the Air Force has been working on a chemical laser installed in the fuselage of a 747 freighter and fired from a turret mounted to the airliner’s nose. The Airborne Laser was originally meant for a combat role intercepting ballistic missiles, but in 2009 Secretary of Defense Robert Gates downgraded it to a strictly test asset, citing its high cost, short firing range and vulnerability. Future military lasers will dispense with the chemicals in favor of solid crystals, potentially making them much smaller, safer and more reliable. That’s the kind of laser we can expect to see on the new bomber.

Bunker-busting bombs have been around since World War II. In their modern form, they date back to the 1991 Gulf War. Today’s 5,000-pound GBU-28 bunker-buster can be carried by the F-15E and by bombers. For more deeply-buried targets, the Pentagon is working on the 30,000-pound Massive Ordnance Penetrator, which is so big only the B-2 and B-52 can haul it.


To save on cost, the new bomber will be smaller and therefore carry less ordnance than the B-2. MOP probably won’t fit. Noting that penetrating-capability is a function of mass and velocity, the Air Force Research Laboratories is working on a rocket-boosted bunker-buster that would be a fraction of the MOP’s size while being just as lethal against underground targets.

READ THE REST OF THE STORY AT WIRED

Posted by Steve Douglass at 2:49 PM No comments:

In a column posted on Time's website, Robert Baer said the sabotage would begin by blowing up pipelines to the Mediterranean. However he added that the same source had also told him two weeks ago that unrest in neighboring countries would never spread to Libya -- an assertion that has turned out to be wrong.

"Among other things, Gaddafi has ordered security services to start sabotaging oil facilities," Baer wrote. "The sabotage, according to the insider, is meant to serve as a message to Libya's rebellious tribes: It's either me or chaos."

The growing violence in Libya has forced a number of oil companies to shut in production in Africa's third-largest oil producer and disrupted flows from the country's export terminals.

Security forces have cracked down fiercely on demonstrators across the country, with fighting spreading to Tripoli after erupting in Libya's oil-producing east last week. As the fighting has intensified some supporters have abandoned Gaddafi.

Baer, a former Middle East CIA officer, said the source told him that as of Monday Gaddafi had the loyalty of only about 5,000 of the country's 45,000-strong regular army.

Paraphrasing the source, he said that Gaddafi had also ordered the release from prison of the country's Islamist militant prisoners in hopes they would act on their own to sow chaos.

(Reporting by Jonathan Leff; Editing by Frances Kerry)
Posted by Steve Douglass at 2:48 PM No comments: 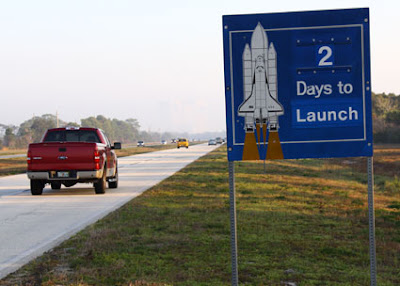 Space shuttle Discovery continues to move toward launch Thursday, Feb. 24, as technicians put the finishing touches on the spacecraft and the launch team runs through the countdown checklist. Liftoff is scheduled for 4:50 p.m. EST. The weather forecast calls for an 80 percent chance of acceptable conditions at launch time.

A minor problem came up when a regulator in the reactant storage system developed a slight leak, NASA Test Director Steve Payne said.

"In this case, we've seen it before," Payne said, adding that the system has numerous redundancies and the leak is so small. A waiver is to be completed soon and no impact to the countdown or launch is expected.

This is the last flight of Discovery, and with the shuttle program nearing retirement, Payne said crowds are growing to see the last launches.

"People are starting to realize they either see one now or they don’t get to see one," Payne said.
Posted by Steve Douglass at 8:22 AM No comments:

Four Americans, including a couple from Southern California, who were taken hostage by Somali pirates were fatally wounded by their captors while negotiations between the pirates and U.S. military forces were underway in the Gulf of Aden, U.S. Central Command said Tuesday.

The four were aboard the vessel Quest, which was captured last week.

[Updated, 6:45 a.m.: The bodies of the four Americans are on board the carrier Enterprise off the Horn of Africa, according to Central Command. The names of the Southern California couple were Scott and Jean Adam, boaters who were based out of Orange County.]

Four U.S. Navy ships had been shadowing the Quest after it was taken over by the pirates, Mattis said. While negotiations were underway to gain the release of the Americans, U.S. forces responded to gunfire aboard the Quest. The four Americans had been shot, Mattis said.

Two of the pirates were killed by U.S. forces and 13 captured, Mattis said. After boarding the Quest, military personnel found the bodies of two other pirates. The incident occurred about 1 a.m. EST.

"Despite immediate steps to provide lifesaving care, all four hostages ultimately died of their wounds," according to a statement from Central Command.

The four Americans also included a couple from the Seattle area.
Posted by Steve Douglass at 7:05 AM No comments:

Think "Sneakers" meets "The Hardy Boys", Static and his rag-tag gang of teen techies are tricked into hacking into and stealing the prototype of an unmanned stealth warplane. It can soar to Mach 6, fly rings around any jet fighter and is in the hands of a spy who wants to sell it to North Korea. It is the Interceptors Club mission to get "The Black Manta" back.

Posted by Steve Douglass at 5:52 AM No comments: 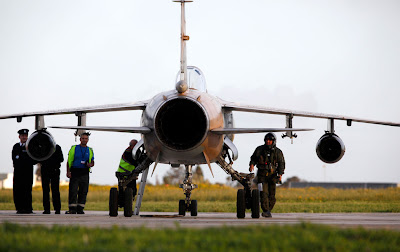 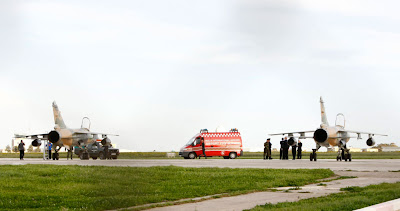 AP: VALLETTA, Malta — Two Libyan air force jets landed in Malta on Monday and their pilots asked for political asylum amid a bloody crackdown on anti-government protesters in Libya, a military source said.

The two Mirage jets landed at Malta International Airport shortly after two civilian helicopters landed carrying seven people who said they were French. A military source familiar with the situation said the passengers had left in such a hurry that only one had a passport.

The source, who insisted he not be identified further, said the jet pilots — both Libyan air force colonels — had communicated from the air that they wanted political asylum. They had left from a base near Tripoli and had flown low over Libyan airspace to avoid detection, the source said.
The aircraft remained at Malta's airport, away from the commercial area, while the pilots and helicopter passengers were being questioned by airport immigration officials, the source said.

After a week of protests, anti-government unrest spread Monday to the capital Tripoli with clashes in Tripoli's main square for the first time. European governments and oil and gas companies were evacuating their citizens.
Posted by Steve Douglass at 4:39 AM No comments: