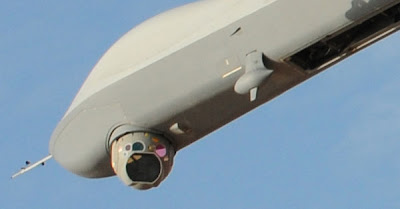 Special To The The Telegraph: Nato forces designated Gaddafi as a military target after the former Libyan leader’s forces started firing on civilians as they tried to escape Sirte in a convoy of up to 100 vehicles.

It is understood that RAF Tornados were patrolling over Sirte at the time of the escape attempt but were not directly involved in the operation.

Gaddafi had been under surveillance by Nato forces for the past week after an intelligence breakthrough allowed them to pinpoint his location.

An American drone and an array of Nato eavesdropping aircraft had been trained on his Sirte stronghold to ensure he could not escape.

Intelligence sources have suggested that in his last days Gaddafi broke his rigid rule of telephone silence and was overheard using either a mobile or satellite phone. Voice recognition technology would have instantly picked up any call that he made.

MI6 agents and CIA officers on the ground were also providing intelligence and it is believed that Gaddafi was given a code name in the same way that US forces used the name Geronimo during the operation to kill Osama bin Laden.

Since the fall of Tripoli in August, intelligence services have been searching for Gaddafi across Libya and beyond using agents, special forces and eavesdropping equipment.
US and British special forces had trawled through Gaddafi’s former desert stronghold around Sirte and the south of Libya without finding him.

At one point they concluded that he probably had fled the country.
But as the National Transition Council forces increased their stranglehold on Sirte, Gaddafi decided to make a run for it at 8.30 yesterday morning.

Defence sources referred to the move as “tantamount to suicide”.

“US Predators and French drones have been staking out the centre of Sirte for several weeks trying to monitor what’s going on on the battlefield,” said an intelligence source. “They built up a normal pattern of life picture so that when something unusual happened this morning such as a large group of vehicles gathering together, that came across as highly unusual activity and the decision was taken to follow them and prosecute an attack.”

Electronic warfare aircraft, either an American Rivet Joint or a French C160 Gabriel, also picked up Gaddafi’s movements as he attempted to escape

There were no RAF Nimrod R1s to intercept signals intelligence as they had been axed in the middle of the campaign as part of defence cuts.

But a pair of RAF Tornado GR4s were on a “combat reconnaissance” patrol nearby and provided intelligence on vehicle movements.

The Predator drone, flown out of Sicily and controlled via satellite from a base outside Las Vegas, struck the convoy with a number of Hellfire anti-tank missiles. Moments later French jets, most likely Rafales, swept in, targeting the vehicles with 500lb Paveway bombs or highly accurate AASM munitions.

British forces are expected to withdraw from Libya in the coming weeks.
Last night, William Hague, the Foreign Secretary, said: “It brings much closer the end of the Nato mission.”
Posted by Steve Douglass at 7:55 PM No comments: A U.S. Predator drone was involved in the airstrike on Muammar Qaddafi's convoy Thursday in the moments before his death, a U.S. defense official told Fox News.

He was later killed, reportedly in the crossfire between Qaddafi supporters and opponents as he was being transferred.

Libyan strongman Muammar Qaddafi was confirmed dead on Thursday, captured near his hometown of Sirte. Here is a look back at how the "king of kings of Africa" came to an end.

President Obama and other officials would not elaborate on the circumstances of Qaddafi's death. White House Press Secretary Jay Carney said only that U.S. and NATO actions helped Libyans reach this point.

But as some lawmakers continued to criticize the administration for its handling of the Libya operation, Obama pointed to the end of the Qaddafi regime as the close of a "long and painful chapter" for Libyans and defended the multilateral mission which began in March.

"Today we can definitively say that the Qaddafi regime has come to an end," Obama said. "This is a momentous day in the history of Libya."

Obama, speaking in the Rose Garden, said of Libyans, "You have won your revolution."
Obama said the NATO mission would soon be over; if so, the use of a Predator drone Thursday would mark a fitting end for U.S. involvement.

READ THE REST OF THE STORY HERE
Posted by Steve Douglass at 2:05 PM No comments:

Abdel Majid Mlegta told Reuters news agency the deposed dictator was wounded.
The senior NTC military official said: "He was captured. He's wounded in both legs ... He's been taken away by ambulance."

It was later reported Gaddafi had died from his injuries.
"He was also hit in his head," the official said. "There was a lot of firing against his group and he died."

A senior official with Libya's National Transitional Council told Reuters Gaddafi was captured near his hometown of Sirte at dawn as he tried to flee in a convoy that came under attack from NATO warplanes.

A Libyan fighter claimed Gaddafi was hiding in a hole in his hometown of Sirte shouting: "Don't shoot, don't shoot.

Epitaph for a scumbag:

Posted by Steve Douglass at 5:45 AM 2 comments: 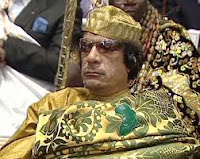 That report, however, could not be independently confirmed.
Horns blared and celebratory gunfire burst into the air in Tripoli.

"It's a great victory for the Libyan people," said Libyan Information Minister Mahmoud Shammam.
Gadhafi ruled Libya with an iron fist for 42 years. The mercurial leader came to power in a bloodless coup against King Idris in 1969, when he was just an army captain.
By the end of his rule, he claimed to be "King of Kings," a title he had a gathering of tribal leaders grant him in 2008.

But a February uprising evolved into civil war that resulted in ousting the strongman from power.
But whether Thursday turns out to be the biggest day in recent Libyan history was still uncertain. Statements made by representatives of Libya's new leadership in the past have not always turned out to be true.

Many were waiting for photographs as proof of Gadhafi's capture.
Posted by Steve Douglass at 5:10 AM No comments: