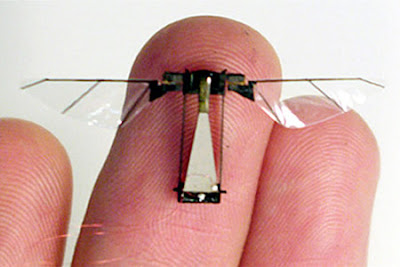 New miniature camera technology may be about to give the US military's insect-sized surveillance drones a new way of seeing the world that's more energy-conscious than before. Yay, technology?

New Scientist reports that a new microchip-sized digital camera, developed by the California Institute of Technology using funding from NASA and the Pentagon, has been patented and is expected to replace current camera technology on the tiny spy drones.


According to the article, the revolutionary aspect of the design is that the new size means that the main power drain on existing minicams - connecting the chips for the sensors and support circuitry - is no longer necessary, making the new remote controlled camera use much less energy, and therefore be more suited for secret surveillance missions. I'm not sure how I feel about this news, not least of all because I didn't even know that the US military even had insect-sized surveillance drones before.

Posted by Steve Douglass at 8:28 PM No comments: