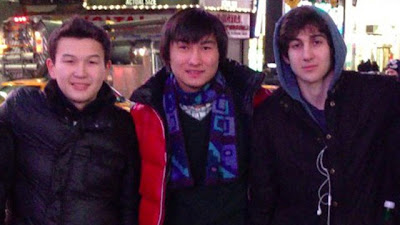 ABC NEWS: Three more people have been taken into custody in connection to the deadly bombing at the Boston Marathon, the Boston Police Department tweeted today. The brief statement said more details were forthcoming.

Authorities believe the bombing was carried out by two brothers of Chechen ethnicity, Tamerlan and Dzhokhar Tsarnaev. Tamerlan was killed in a shootout with police days after the attack and Dzhokhar was injured and later taken into custody. Three people were killed and another 170 were injured in the April 15 dual bombing near the finish line at the Boston marathon.

News of the additional suspects comes after the FBI said they had expanded their investigation and were interested in learning more about nearly a dozen persons of interest.

Late Tuesday, the Tsarnaev family was deciding what to do with Tamerlan's body.


UPDATE: Two college-aged friends of bombing suspect Dzhokhar Tsarnaev, 19-year-olds Dias Kadyrbayev and Azamat Tazhayakov, will appear in court this afternoon in Boston for their first appearance for allegedly destroying or concealing a laptop computer and a backpack containing fireworks belonging to Dzhokhar, according to the Department of Justice.

The third new suspect, American 19-year-old Robel Phillipos, who will also appear in court, has been charged with lying to federal law enforcement officers.

Dzhokhar is in custody after being seriously injured in his flee from police. His brother and alleged co-conspirator Tamerlan was killed in a shootout with police hours before Dzhokhar's capture. The pair is accused of setting off two bombs near the finish line of the Boston Marathon on April 15, killing three people and injuring 170 more.

According to court documents, all three new suspects went to Dzhokhar's dormitory room after they saw images released by the FBI of two suspects, one of which resembled their friend, but it wasn't until they noticed fireworks with missing powder in the room that Kadyrbayev "knew" Dzhokhar was involved with the deadly attack.


Kadyrbayev decided to take the backpack "to help his friend [Dzhokhar] avoid trouble" and took the laptop because he didn't want Dzhokhar's roommate to think he was behaving suspiciously. The documents assert that later Kadyrbayev and Tazhayakov decided together to throw the backpack and fireworks in the trash.

Prosecutors said Phillipos initially told federal investigators he did not remember going to Dzhokhar's room and then said the three friends went there but did not go in. In his fourth interview with investigators, however, Phillipos "eventually confessed that he had lied to the agents," the court documents say.

Kadyrbayev and Tazhayakov face up to five years in prison and Phillipos faces a maximum sentence of up to eight years if convicted, the DOJ said.
Posted by Steve Douglass at 8:34 AM No comments: