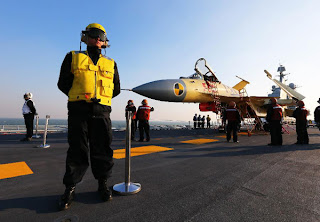 LIAONING AIRCRAFT CARRIER, Nov. 25 (Xinhua) -- China has successfully conducted flight landing on its first aircraft carrier, the Liaoning, naval sources said.
A new J-15 fighter jet was used as part of the landing exercise.
After its delivery to the People's Liberation Army (PLA) Navy on Sept. 25, the aircraft carrier has undergone a series of sailing and technological tests, including the flight of the carrier-borne J-15.
Capabilities of the carrier platform and the J-15 have been tested, meeting all requirements and achieving good compatibility, the PLA Navy said.
Since the carrier entered service, the crew have completed more than 100 training and test programs.
The successful flight landing also marked the debut of the J-15 as China's first generation multi-purpose carrier-borne fighter jet, the PLA Navy said.
Designed by and made in China, the J-15 is able to carry multi-type anti-ship, air-to-air and air-to-ground missiles, as well as precision-guided bombs.
The J-15 has comprehensive capabilities comparable to those of the Russian Su-33 jet and the U.S. F-18, military experts estimated.
Posted by Steve Douglass at 5:49 PM No comments: