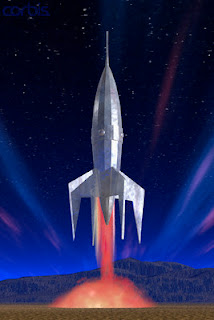 By CHOE SANG-HUN
Published: April 3, 2009
SEOUL, South Korea — Determined to demonstrate its latest missile technology both to its adversaries and perhaps to potential buyers in the Middle East, North Korea pressed ahead with final preparations on Friday to launch a multistage rocket.

The countdown could begin as early as Saturday morning, and North Korea says its rocket will blast off sometime between then and Wednesday. It warned aircraft to stay clear of its easterly trajectory over northern Japan, toward the Pacific.

Weather forecasts say it will be cloudy with no strong winds over the Musudan-ri launching site on North Korea’s coast, meaning the North could launch the rocket anytime during the period.

“I think it’s almost certain North Korea will fire the missile,” President Lee Myung-bak of South Korea said Friday in London, where he was attending the Group of 20 summit meeting, Reuters reported. Mr. Lee vowed a “strong and stern response.”

North Korea says it is launching an experimental communications satellite. But Washington and its allies see the test as a provocative demonstration of ballistic missile technology and an attempt to secure a place on President Obama’s crowded foreign policy agenda.

Neighboring governments were on heightened alert on Friday, and had navy ships with missile-tracking radar deployed in waters near North Korea. For its part, the North reportedly moved jet fighters closer to the launching site and threatened to counterattack if any government tried to stop it.

“It’s too early to say for sure whether the object the North is launching is a satellite or a missile,” said Lee Jong-joo, a government spokeswoman in Seoul. “But our principled position is that whether this is a missile or something else, it threatens peace and stability on the Korean Peninsula.”

Unable to persuade the North to cancel its plan, Washington, Tokyo and Seoul focused on how to forge a unified front with China and Russia in penalizing the North, while also drawing it back to six-nation talks on ending its nuclear weapons program.

But if North Korea puts a satellite into orbit — as it claims it wants to do, and as a growing number of analysts believe it will try to do — then any attempt to introduce new sanctions in the Security Council will be hobbled by disputes over whether the North violated the 2006 resolutions, analysts said.

In Strasbourg, France, Robert Gibbs, the White House spokesman, said the launching would be a violation of Security Council resolutions, and said “preparations” were being made if it went ahead, Reuters reported. He did not provide details in comments to reporters during a trip to Europe by Mr. Obama.

Prime Minister Taro Aso of Japan told China’s president, Hu Jintao, during the Group of 20 summit meeting that if the launching went ahead, there should be a new United Nations resolution, the Yomiuri newspaper reported. Mr. Hu showed “some understanding” but did not made a clear commitment, the newspaper said.

For the North Korean leader, Kim Jong-il, who reportedly suffered a stroke in August, a successful launching would demonstrate his country’s mastery of key missile technologies.

Mr. Kim is also using the tensions he has stirred up to rally his hungry people amid dwindling foreign aid, and to demonstrate to the outside world that he is still in charge, analysts said. In a sales pitch for his missiles, Mr. Kim may also have invited arms dealers from the Middle East to the launching site, they said.

“Evidence suggests that North Korea has had extensive dealings with Iran, Pakistan, Russia, Yemen and Libya on ballistic missiles and possibly even nuclear warheads,” said a recent report from the Congressional Research Service in Washington.

Experts believe that the rocket North Korea is about to launch is derived from its Taepodong-2 missile, which the North began developing in the 1990s. But they are not sure about its potential or the North’s ability to arm missiles with nuclear warheads.

The Congressional Research Service report said some analysts believed that the Taepodong-2 missile could deliver a 700 to 1,000 kilogram payload more than 4,000 miles, within range of the Alaskan coast, as well as all American military targets in Japan and Guam.

The North Korean rocket would weigh about 80 tons and could place a payload of 100 kilograms, or 220 pounds, into orbit at about 250 miles, David Wright, co-director of the Union of Concerned Scientists’ Global Security Program, wrote recently , citing some inconclusive assumptions. When used as a missile, the same rocket could carry a 500-kilogram payload about 5,600 miles, far enough to reach San Francisco.

But “since it likely would be difficult for North Korea to build a first-generation warhead and heat shield with a mass of 500 kilograms, this wouldn’t represent a true intercontinental nuclear capability,” Mr. Wright wrote.

The North’s first test of the Taepodong-2 missile failed in 2006 when it blew apart 40 seconds after launching.
Posted by Steve Douglass at 3:32 PM No comments:

TSSAM Settled, Is A-12 Next?: "The long-running legal saga over the Pentagon’s cancellation of the TSSAM stealthy cruise missile is over. Could it pre-sage a settlement for the A-12?

Northrop Grumman has announced the end to two cases between it and the government over the Tri-Service Standoff Attack Missile, which the Pentagon announced Dec. 9, 1994 would be cancelled. Northrop began the development program in1986 under a fixed-price, incentive fee contract.

The decision was part of a slew of program adjustments the Clinton Administration made on that day, including restructuring the RAH-66 Comanche helicopter, which has since been cancelled as well, and a decision to reduce F-22 and V-22 procurement. The cuts, the Pentagon promised, would save $7.7 billion. The TSSAM cancellation alone was promised to yield $2.1 billion in savings.

The docket over the TSSAM court case is voluminous. Due to the classified aspects of the stealthy missile, lawyers at one point argued the case could be bigger and more complex than the one over the Defense Dept.’s 1991 decision to cancel the U.S. Navy’s A-12 Avenger II stealthy attack aircraft program.

In the end, the TSSAM settlement is somewhat anti-climatic. Northrop Grumman wins one round, and loses another. The awards cancel each other out.

Northrop’s earnings will actually show a positive outcome from the case, since it took a provision in 2006 for the microelectronics claim. Although the outcome may be financially positive for Northrop, TSSAM also effectively drove the company out of the standoff missile business and the Perry, Georgia, facility where TSSAM was to be built was closed.

TSSAM was initially supposed to be a missile for the U.S. Air Force and Navy for air-launched applications (the AGM-173A), and Army for ground-launched applications (the MGM-137B). There would actually be four versions, two for precision attack and two to dispense submunitions. At one point, production was planned to reach 6,650 missiles. There were even plans to see if the U.K. would buy into the program.

The Army was the first to jump-ship, followed by the Navy. The Air Force, which led the program, remained with the TSSAM until the bitter end.The development and production program was estimated at $14.5 billion at the time.

The Navy, to fill the capability gap, eventually opted for the Boeing Standoff Land-Attack Cruise Missile - Expanded Response. The Air Force launched the Joint Air-to-Surface Standoff Missile program. When the Lockheed Martin missile started encountering development problems and cost growth, there was concern it could become another TSSAM in the making; in that case, however, the Air Force managed to see the program through into production.

The TSSAM case and A-12 situation are far from identical, but there are parallels. TSSAM was cancelled for convenience, not for cause as happened with the A-12. Although it was never said so explicitly, it was the legal battle over the A-12 that convinced the government to cancel TSSAM for convenience, not for cause. At cancellation, the missile's unit costs had ballooned to over $2 million per copy from a target of around $720,000.

There have been on-again, off-again talks between the Pentagon and Boeing and General Dynamics, the industrial partners legally responsible now for the A-12, to settled the case that stems from the 1991 cancellation of the program under then-Defense Secretary Dick Cheney. He asked for the program to be killed for cause after finding the program was behind schedule and over cost. But the contractor team (General Dynamics and McDonnell Douglas, now a part of Boeing) insisted the program was canceled for ‘convenience,’ entitling them to termination fees.

There are major financial issues at stake. If the court sides with the government, the industry team could be forced to pay more than $2.7 billion.

Boeing, in a recent annual filing with the Securities and Exchange Commission, says that it is on the hook for more than $1.6 billion. That includes half of $1.35 billion in progress payments and half of $1.4 billion in interest, as well as another $275 million Boeing would write down in inventory costs. General Dynamics has put its total at risk at around $1.4 billion.

But if the court sides with the contractors, Boeing says it stands to receive $1.1 billion, which includes interest.

The legal battle has been waging for some time, now. The latest round in the appeal was argued in December. The first ruling in the case came in 2001, when the court sided with the government’s default termination. But that outcome was set aside in 2003 by the U.S. Court of Appeals for the Federal Circuit because of apparent mistakes made by the lower court.

On May 3, 2007, the lower court again ruled in favor of the government, with the contractors filing their renewed appeal the next day.

At times it seemed the high dollar amounts involved and the complexity of the deal would mean a government-industry agreement would be out of reach, but perhaps TSSAM indicates that’s not the case.

Posted by Steve Douglass at 9:31 AM No comments:

Obama slams N. Korea's launch plans: "U.S. President Barack Obama sent a public warning to North Korea Friday, calling on Pyongyang to back off plans to launch what the United States believes to be a missile.

Posted by Steve Douglass at 9:29 AM No comments: