Starting Saturday and ending on April 15 residents on or near the base may notice increased activity.

Residents may hear sirens and or simulated explosions near the base.

Base officials are asking not to be alarmed at the activity as it is only training to help keep the pilots at the best of their abilities.
Posted by Steve Douglass at 7:53 PM No comments: 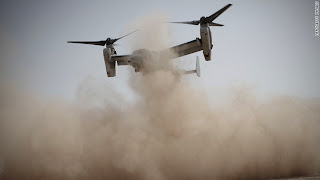 The crash took place late Thursday night in an arid and remote stretch of territory where the Taliban are active west of the city of Qalat, the capital of Zabul province, which borders Pakistan, the coalition said.

The Taliban quickly claimed that insurgent fighters downed the Osprey, a tilt-rotor aircraft that can take off and land as a helicopter, and that flies as a fixed-wing plane once its engines roll forward.

A Taliban spokesman said that the Osprey was shot down around 1 a.m. Qari Yusuf Ahmadi, the spokesman, claimed that around 30 people were killed in the crash. The U.S.-led coalition said that, in addition to the four fatalities, "numerous" other coalition service members were injured.

Mr. Ahmadi warned that the North Atlantic Treaty Organization should expect to lose more helicopters in Afghanistan, saying the Taliban have mastered the ability to shoot down allied aircraft.

Downing an Osprey would be a victory of sorts for the insurgents. The sophisticated aircraft, which travels at much higher speeds than conventional helicopters, is primarily used to transport troops on long-range infiltration missions and for resupply purposes.

The Taliban usually take credit whenever coalition aircraft experience problems. NATO and Afghan officials say most of these crashes and hard landings have been caused by technical problems rather than insurgent activity.

Three coalition helicopters crashed in Afghanistan last month. Only one of these incidents, involving a civilian chopper contracted by U.S. forces in the northern province of Kunduz, was caused by insurgent fire, say NATO and Afghan officials. No one died in that incident.

NATO said it was investigating what caused Osprey's crash. Afghan officials in Zabul blamed it on mechanical problems.

Other personnel aboard were injured and were taken to a military base for treatment, NATO said.

The CV—22 Osprey went down about 7 miles (11 kilometers) from Qalat, the capital of Zabul province, NATO said. The cause of the crash was under investigation.

The Osprey takes off and lands as a helicopter, but its engines roll forward in flight, allowing it to fly faster than a standard helicopter.

A Zabul government spokesman, Mohhamed Jahn Rasuliyar, confirmed the crash and the number of casualties.

A Taliban spokesman had earlier claimed militants shot down the aircraft, part of a pattern of the insurgents making such claims to promote their cause of driving foreign forces from the country.

Choppers are used extensively by both NATO and the Afghan government forces to transport and supply troops spread across a mountainous country with few roads. Losses have been relatively light, despite insurgent fire and difficult conditions, and most crashes have been accidents caused by maintenance problems or factors such as dust.

Lacking shoulder-fired missiles and other anti-aircraft weapons, the Taliban rely mainly on machine guns and rocket-propelled grenades to target helicopters at their most vulnerable during landings and takeoffs.

One of the heaviest single-day losses of life for allied forces occurred on June 28, 2005, when 16 U.S. troops died aboard a Special Forces MH—47 Chinook helicopter that was shot down by insurgents.

The incident was the first known deadly crash of an Osprey since it entered active service in 2006, although numerous lives were lost in accidents while the aircraft was under development.

The Osprey is the U.S. military’s latest generation transport aircraft, able to travel twice as fast and three times farther than its predecessor, the Vietnam War—era CH—46 Sea Knight. With room for up to 24 passengers, it comes equipped with sophisticated guidance and missile defence systems.

The original programme, a $40 billion joint venture of Boeing Co. and Textron Inc.’s Bell Helicopter unit, was beset by delays and plagued by design flaws and other problems.

It was nearly cancelled several times due to cost overruns - which pushed the bill to over $100 million per aircraft - and a series of fatal crashes and other incidents. In 2000, a crash in Arizona killed all 19 Marines aboard and a separate crash killed four Marines in Florida.

Critics say the aircraft is particularly vulnerable to ground small-arms fire while its engines are shifting from vertical to horizontal flight. They say that, unlike fixed-wing aircraft, the Osprey can’t glide down to an emergency landing in case of a loss of power and its propellers lack the ability to keep rotating on their own even after the engines fail.
Posted by Steve Douglass at 5:58 AM No comments: