Freaky "Alpha Dog" may some day accompany troops in to battle scare crap out of the enemy. 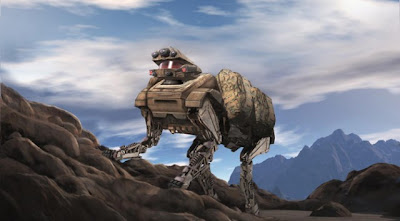 Some dog owners spend years grooming their pups into strong, obedient alpha dogs. But scientists? They just build them.

A group of military-funded scientists from Boston has invented a dog-like robot, that can carry over 400 pounds on its back for 20 miles and on any sort of terrain. It uses computer vision and GPS to follow a leader, rather than require a remote-controlled driver to tell it where to go.

Nicknamed "AlphaDog," the prototype is the latest from the minds behind a four-year undertaking called BigDog, that's being developed by Boston Dynamics and funded by DARPA and the U.S. Marine Corps. AlphaDog is officially called "LS3," or the Legged Squad Support System.

Check out a video demo below. As you can see, AlphaDog can walk and trot over sharp rocks, albeit rather slowly. Escapist Magazine says it will take the robot 24 hours to cover 20 miles, though no re-fueling is needed. Clearly AlphaDog is designed more for walking alongside troops rather than outpacing anyone.

The video also shows two grown men pushing AlphaDog off its course, and once it does, the robot immediately resumes its original path. It can even get up after being knocked down. Pretty cool stuff.

Boston Dynamics is also making robotic bugs that can squeeze through cracks, a reptilian robot that can scale walls and trees, and an anthropomorphic robot that will be used to test chemical protection clothing worn by the U.S. Army.

Is this the next Blackhawk? 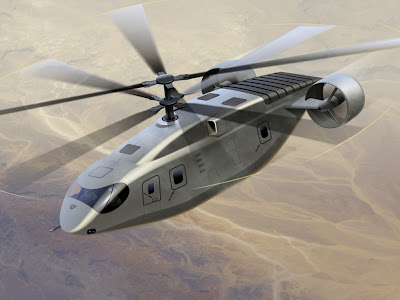 AVX Aircraft Company has been awarded a contract by the US Army to conduct Configuration Trades Analysis (CTA) studies for the Joint Multi Role helicopter program.

According to AVXs' web site: "AVX Technology can be used to modify existing fleets of helicopters at a very low cost, and can be used to design and manufacture completely new helicopters. In both cases, AVX Technology combines proven technologies to achieve greater aerodynamic efficiency, speed, range, fuel efficiency, HOGE, utility and the ability to operate at higher altitudes and in hotter temperatures than conventional helicopters.

The key technical features of the configuration are Counter Rotating Coaxial Rotors and Dual Ducted Fans. AVX is working on several new aircraft programs including the U.S. Army Joint Multi Role helicopter under a CTA contract with the U.S. Army."

http://www.avxaircraft.com
Posted by Steve Douglass at 1:44 PM No comments:

Posted by Steve Douglass at 11:41 AM No comments:

A Pennsylvania company has won a $1.35 million prize from NASA for developing a highly efficient airplane power by electricity.

The plane developed by Pipistrel doubled the fuel efficiency requirement for the competition – flying 200 miles in less than two hours while using less than a gallon of fuel per occupant or the equivalent in electricity. The winning plane used a little more than a half-gallon of fuel per passenger for the 200-mile flight.

"Two years ago the thought of flying 200 miles at 100 mph in an electric aircraft was pure science fiction," Jack W. Langelaan, team leader of Team Pipistrel-USA.com, said in statement. "Now, we are all looking forward to the future of electric aviation."

The winning aircraft, the Pipistrel Taurus G4, is a four-seat, twin-fuselage aircraft powered by a 145-kilowatt brushless electric motor driving a two-blade propeller mounted on a spar between the fuselages. The plane's wingspan is about 75 feet.

"I'm proud that Pipistrel won. They've been a leader in getting these things into production, and the team really deserves it, and worked hard to win this prize," Raymond said in a NASA statement.
Posted by Steve Douglass at 7:42 AM 1 comment: