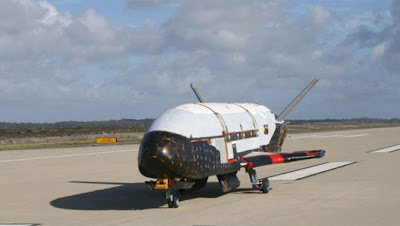 by Staff Writers
Cape Canaveral FL (SPX) Mar 2, 2011
The 45th Space Wing is set to launch an Atlas V Evolved Expendable Launch Vehicle from Space Launch Complex 41 on March 4, 2011. The rocket will carry an Air Force X-37B Orbital Test Vehicle (OTV). The launch window for this Air Force mission opens at 3:39 p.m. EST.
The X-37B will provide a flexible space test platform to conduct various experiments and allow satellite sensors, subsystems, components and associated technology to be efficiently transported to and from the space environment where it will need to function.

Authors note: It is interesting (and maybe planned) that Discovery will be in orbit at the same time as the X-37. Read into that what you will.

Photos of a shovel-nosed (Fastmover) real or fake? 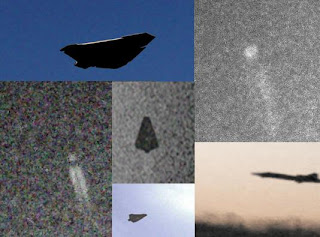 Today in my e-mail someone posted to me a link that he thought I might be interested in. It was concerning a fast-moving black aircraft that has been heard and seen over the British Isles over the last many years.

Although I have been following the sighting reports, sky-quake reports and it is clear that probably some kind of covert high-speed aircraft operating (occasionally) out of the RAF base (now dormant) at Machrihanish Scotland, I am understandably skeptical when someone claims to have actual photos of this elusive bird.

Here's the e-mail I received from (goose) today.

I have been a visitor to both your old project black website and more recently your Black Horizon website when I found out about it. An hour or two ago I saw a picture posted up on a web forum of a supposed aircraft that a group in England ( And possibly other places) have been following for the last few years. You may have already seen these photos ( Or even have been involved with the group as it sounds like it may have involved people in the States too), in which case apologies for sending this too you. If you haven't, I figured you may be interested in it and would love to hear your opinion on the photos and whether or not you think they are genuine. I have to admit I'm sceptical but keeping an open mind. The top left photo is the one thats adding doubt to my mind for some reason.


First thank you (goose) for visiting my blog and thinking of me when you saw this post HERE.

I'm glad you called it to my attention - and equally glad you are skeptical. Keep in mind (readers) skepticism is healthy doubt - until proven genuine.

As there are many who have been skeptical of my own sightings and photos and videos (and I always invite debate) I too view purported black aircraft photos with reserved judgement until three criteria have been satisfied.

1. Who took the photo and where? /details/time/dates/location/conditions etc ...
2. EXIF data - camera - lens used - ISO - raw images available for analysis
3. Background story ... was their witnesses? Anyone else who can back up the poster's claims? etc ...

There are also (related) three things that (once I delve deeper) that usually immediately throw any image into the "doubtful" column.

2. If the source is listed as "anonymous - because they don't want to get a visit from the federal authorities" chances are it is fake. As far as I know no one has ever been questioned or imprisoned or even visited by the "men in black" for posting an image of a supposed secret aircraft - because to do so would - well- acknowledge the very existence of said black project.

In fact - three letter agencies just love the postings of fakes, frauds, speculation, sightings and fuzzy images because, A: an enemy intelligence agency is always doubtful of information that comes through official channels and B: the purported rumors and speculation and guestimates about a silver bullet system (if it indeed exists) keep our enemies up at night - wondering just what kind of hyper-super-duper gee-whiz wonder weapon or spy system is capable of doing to them.

As one ex-spook once told me. "Let them loose sleep wondering if the fly on the wall is really a robot equipped with a microphone and a camera or that high-flying red dot is a spysat or an Aurora.? "

Can I duplicate the photo....

That said - I'm fairly sure the photos (especially the one in the left hand corner is bogus.
It meets none of my criteria - and in only ten minutes I was able to create a pretty convincing look-alike using a 3-D rendering of the Space Shuttle I found on Google images.


But don't take my word for it - try it yourself - or if you are the author or poster of the images - contact me and PROVE ME WRONG!

My e-mail is listed at the top of this blog.

Samples to folow - but you'll have to go to this LINK to see the photos and context in question.

I took the below image and pinched - prodded and pulled it apart in Photoshop to create my fake. 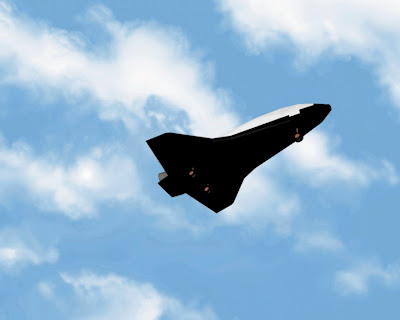 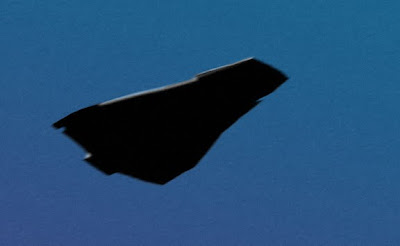 As for the other images? They are grainy and blurry and there's not any real information there to make a definite judgement either way.

Special thanks to "goose" - good eye! 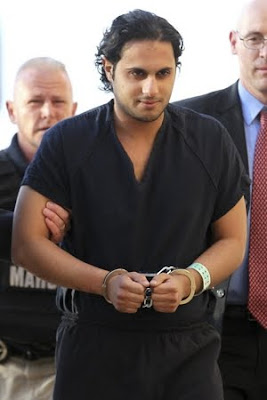 Khalid Ali-M Aldawsari, the 20-year-old accused of stockpiling chemicals for his planned attacks, snapped photos of the Statue of Liberty, Times Square and Wall Street while posing as a tourist during his four-day trip, the sources said.

The one-time Texas Tech chemical-engineering major hoped to construct improvised explosive devices out of dolls, and then place them in strollers and set them off around the perpetually crowded sites, prosecutors said.

He was arrested Wednesday in Lubbock after a chemical supplier tipped off the feds. Law enforcement seized photographs of the New York trip from his apartment, sources said.
Aldawsari, who appeared in court yesterday handcuffed and in leg shackles, faces life in prison if convicted of attempted use of a weapon of mass destruction.

He plans to plead not guilty when he returns to court on March 11, said his lawyer, Rod Hobson.
"This is America, where everyone is entitled to the presumption of innocence, due process, effective representation of trial and a fair trial," Hobson noted.
Classmates of Aldawsari -- who prosecutors say was inspired by bin Laden's rhetoric as a boy in

Saudi Arabia -- described him as a loner.
He sporadically posted on his blog, "FromFarAway," an odd mix of Arabic prayers and wishes for martyrdom, and mused about watching "Resident Evil" trailers on YouTube.
While studying English as a second language at Vanderbilt University, he fell in love with his conversation partner, Sarah Rice Stender, a 58-year-old former professor of medicine at the Nashville, Tenn., school.


"She is [so] gorgeous that I can't forget her just right away . . . I am asking Allah the Great to convert her to Islam and marry me," he wrote in 2009.
Stender did not return a call for comment.

Sally Diastole, a senior who lived in the same off-campus apartment as Aldawsari, recalled that whenever she said hi to him, "he just never really acknowledged or responded."
She said her friends sometimes "ding-dong ditched" his apartment as a prank, ringing his bell before quickly running away.

Additional reporting by Jon Arnold in Lubbock, Texas
Posted by Steve Douglass at 5:27 AM No comments:

Libyans finally understand what the rest of the world already knows: "He's crazy"

Tripoli, Libya (CNN) -- International condemnation of Moammar Gadhafi's use of force against civilians continued to grow Tuesday even as the Libyan leader denied the widely documented instances of violence and asserted he was loved throughout the country.

The European Parliament is scheduled to discuss the turmoil in the North African nation Tuesday, a day after the U.S. Ambassador to the United Nations said Gadhafi sounded "delusional" and a Libyan woman said protesters will eventually succeed in ousting Gadhafi because "too much blood has been shed."

And in another act of international condemnation of Gadhafi's regime, the Libyan Embassy in Washington will take down the Libyan flag Tuesday and replace it with one that flew in Libya before Gadhafi took power in 1969, according to the Council on American-Islamic Relations.
Government forces have repeatedly clashed with demonstrators over the past two weeks in Libya, fired on crowds and at times shot indiscriminately at people in the streets, numerous witnesses have told CNN.

Witnesses, reports contradict Gadhafis Thousands of Libyans seek safety Aujali: Gadhafi not living in reality Gadhafi's frozen assets
It is unclear how many people have died in fighting between government troops and rebels. U.N. Secretary-General Ban Ki-moon has said deaths have topped 1,000, while Libya's ambassador to the United States estimated Monday that the death toll was about 2,000.

The ambassador, Ali Suleiman Aujali, told CNN's Wolf Blitzer the figure is based on information from Tripoli and telephone calls. He described Gadhafi's regime as "very cruel."
"I think we realize that he's crazy," said Aujali, who has worked as a diplomat for Gadhafi for 40 years. "But we have no alternative. We have no ways to get rid of him until now," Aujali said, referring to protests inspired by the successful ousters of leaders in Tunisia and Egypt.

In a joint interview with ABC News' Christiane Amanpour and the BBC on Monday, Gadhafi denied using force against his peoples.

"No demonstration at all in the streets," he said, speaking at a restaurant in Tripoli.
Told by the BBC's Jeremy Bowen that he had seen demonstrators in the streets that morning, Gadhafi asked, "Are they supporting us?"

"They love me, all my people with me, they love me all. They will die to protect me, my people," he said.

Soon after Gadhafi's interview, U.S. Ambassador to the United Nations Susan Rice said the Libyan strongman sounded "delusional."
"And when he can laugh in talking to American and international journalists while he is slaughtering his own people, it only underscores how unfit he is to lead and how disconnected he is from reality," she said.

A witness in Misrata, who is not being identified for security reasons, said Gadhafi's claims are inconsistent and nonsensical.
"Gadhafi has been making all kinds of things ... at one moment, he's saying that all of the Libyan people are taking hallucinogens. Another moment he's saying that we're all members of al Qaeda and that we're extremist Muslims. He's all over the place," she said.
UN imposes sanctions on Libya Clinton outraged at Libya, Iran Gadhafi control wanes outside Tripoli Video testimonials from Libya
"Libyans are not members of al Qaeda -- that's absolutely ridiculous. And not everyone's on drugs here. We're fighting for our basic rights -- the right to freedom, the right to education, the right to health care, the right to clean water. The right to -- just basic human rights, and that we will continue to fight until this regime falls."
Gadhafi's regime has lost control of parts of the country to rebel forces, and with each passing day more Libyan officials around the world have defected, joining calls for his ouster.
Posted by Steve Douglass at 5:11 AM No comments: