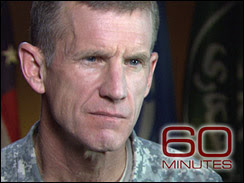 (CBS) As the news from Afghanistan moves to the front pages of Americans' newspapers, the general tasked with turning things around there tells 60 Minutes that the spread of the violence in Afghanistan was more than he expected.

Martin spent a week speaking to the general in Kabul and following him on his daily mission overseeing the coalition forces in Afghanistan.

Asked if things are better or worse than he expected since his arrival a few months ago, the general replies, "They're probably a little worse. I think that in some areas that the breadth of the violence, the geographic spread of violence, is a little more than I would have gathered."

The increased violence has resulted in 265 civilians killed in U.S. or coalition action in the past 12 months the general says, a situation that must stop if victory is to be attained.

"This civilian casualty issue is much more important than I even realized. It is literally how we lose the war, or in many ways how we win it," McChrystal explained.

The general has halted many operations aimed too close to civilians, even if the target area was the source of enemy fire. He believes it's more important to protect civilians than kill Taliban or Qaeda fighters, because not having the support of the Afghan people is a risk he cannot afford.

"If people view us as occupiers and the enemy, we can't be successful and our casualties will go up dramatically," he tells Martin.

Relying on overwhelming U.S. firepower is not the way to proceed in Afghanistan says McChrystal.

"You know, the favorite saying…'To a man with a hammer, everything looks like a nail.' We can't walk with only a hammer in our hands," says McChrystal.


LINK
Posted by Steve Douglass at 4:33 PM No comments: 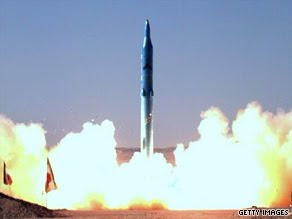 
Iran test-fired a missile in May that was believed to be able to reach parts of Europe.

The missiles, fired at targets around the country Sunday, included the Fateh-110, a short-range ground-to-ground missile, and Tondar-69, a short-range naval missile, the station said. Iran plans to test the long-range Shahab missile on Monday.

The tests, which are expected to go on for the next 10 to 11 days, are codenamed "Payghambar-e Azam 4" or "The Great Messenger 4," Press TV said.

The United States and Israel believe that Iran is seeking nuclear weapons under the guise of a civilian nuclear energy program. Iran has denied the allegation.

In May, Iran said it tested a surface-to-surface missile that is capable of reaching parts of Europe.

At the time, a White House official said the test was noteworthy.

"Of course, this is just a test, and obviously there is much work to be done before it can be built and deployed. But I see it as a significant step forward in terms of Iran's capacity to deliver weapons," said Gary Samore, special assistant to the president on nonproliferation.
Posted by Steve Douglass at 5:52 AM No comments: