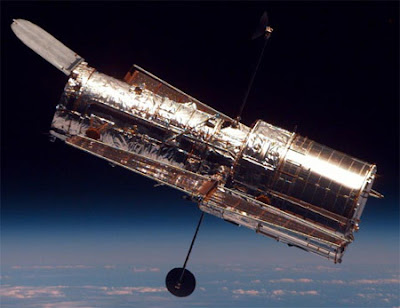 CAPE CANAVERAL, Florida (AP) -- NASA said Monday that it is delaying its mission to the Hubble Space Telescope until next year because of a serious breakdown of the observatory in orbit.


The Atlantis team was scheduled to blast off October 14 to make other repairs and upgrades on the Hubble.

Space shuttle Atlantis had been scheduled to blast off in just two weeks, but an unexpected problem with the Hubble appeared Saturday night, when the telescope stopped sending science data.

That potentially means a new repair issue for the astronauts to confront, one they haven't trained for and never anticipated.

The failure of the command and data-handling system for Hubble's science instruments means the telescope is unable to capture and beam down the data needed to produce its stunning deep space images.

Early Monday afternoon, NASA announced that the October 14 launch had been postponed until at least early next year, possibly February.

When Atlantis does fly, NASA may send up a replacement part for the failed component.

It would take time to test and qualify the old replacement part and train the astronauts to install it in the telescope, NASA spokesman Michael Curie said. NASA also would have to work out new mission details for the astronauts who have trained for two years to carry out five Hubble repair spacewalks.

"The teams are always looking at contingencies, and this is just something that has cropped up we have the ability to deal with. They're just trying to decide what direction we want to go," Curie said.

There is a backup channel for the science instruments' command and data-handling system, and NASA may be able to activate it successfully so that data transmission resumes, Curie said. But if NASA relies solely on the backup channel, there would be no other options if it malfunctioned.

Work has begun to switch the telescope to the backup channel. It is a complicated process; the backup channels on the various modules that must be switched over have not been turned on since the late 1980s or early 1990, right before Hubble was launched. The Hubble team hopes to complete the job by the end of the week.

Curie stressed that the telescope is not in trouble; it just cannot send science information to ground controllers. That means NASA is unable to receive the dramatic pictures Hubble is known for.

The mission by Atlantis and a seven-person crew will be the fifth and final servicing mission to Hubble.

Now, Endeavour will be the next shuttle up, on a trip to the international space station in November. Endeavour is at the launch pad; it was supposed to serve as a rescue ship for Atlantis in case of trouble
Posted by Steve Douglass at 8:05 PM No comments: