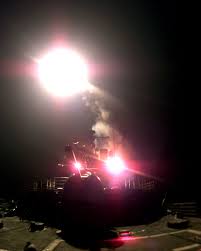 CBS NEWS: U.S. naval forces are moving closer to Syria as President Obama considers military options for responding to the alleged use of chemical weapons by the Assad government.

The president emphasized that a quick intervention in the Syrian civil war was problematic, given the international considerations that should precede a military strike.

Defense Secretary Chuck Hagel declined to discuss any specific force movements while saying that Mr. Obama had asked the Pentagon to prepare military options for Syria.

The Pentagon has dispatched into the eastern Mediterranean a fourth warship armed with ballistic missiles capable of striking Syrian targets.

CBS News national security correspondent David Martin reported Friday that the Pentagon is making the initial preparations for a cruise-missile attack on Syrian government forces. Such an attack wouldn't happen until the president gives the green light, and it was clear during an interview on CNN Friday that he is not there yet.

Joint Chiefs Chairman Gen. Martin Dempsey is expected to present options for a strike at a White House meeting on Saturday, Martin reported.

On Saturday, a White House official said Mr. Obama would "make an informed decision" about the U.S. response to Wednesday's attack "once we ascertain the facts."

The official referred to the president directing the U.S. intelligence community Thursday to investigate the attack because of the alleged use of chemical weapons.

"We have a range of options available, and we are going to act very deliberately so that we're making decisions consistent with our national interest as well as our assessment of what can advance our objectives in Syria," the official said Saturday.

U.S. Navy ships are capable of a variety of military action, including launching Tomahawk cruise missiles, as they did against Libya in 2011 as part of an international action that led to the overthrow of the Libyan government.

"The Defense Department has a responsibility to provide the president with options for contingencies, and that requires positioning our forces, positioning our assets, to be able to carry out different options — whatever options the president might choose," Hagel told reporters traveling with him to Asia.

Hagel said the U.S. is coordinating with the international community to determine "what exactly did happen" near Damascus earlier this week. According to reports, a chemical attack in a suburb of the capital killed at least 1,000 people. It would be the most heinous use of chemical weapons since Iraqi leader Saddam Hussein gassed thousands of Kurds in the town of Halabja in 1988.

The Syrian government accused rebels of using chemical weapons Saturday and warned the United States not to launch any military action against Damascus over an alleged chemical attack last week, saying such a move would set the Middle East ablaze.

The accusations by the regime of President Bashar Assad against opposition forces came as an international aid group said it has tallied 355 deaths from a purported chemical weapons attack on Wednesday in a suburb of the Syrian capital known as Ghouta.


Violence in Syria has already spilled over the past year to Lebanon, Turkey, Iraq and the Israeli-occupied Golan Heights. Battle-hardened Hezbollah fighters have joined the combat alongside Assad's forces.


Meanwhile, U.S. naval units are moving closer to Syria as President Barack Obama considers a military response to the alleged use of chemical weapons by Assad's government.


U.S. defense officials told The Associated Press that the Navy had sent a fourth warship armed with ballistic missiles into the eastern Mediterranean Sea but without immediate orders for any missile launch into Syria. The officials spoke on condition of anonymity because they weren't authorized to discuss ship movements publicly.


Obama emphasized that a quick intervention in the Syrian civil war was problematic, given the international considerations that should precede a military strike.


The White House statement said Obama received a detailed review of the range of options he has requested for the U.S. and the international community to respond if it is determined that Assad has engaged in deadly chemical warfare.


Syria's Information Minister Omran al-Zoubi dismissed the possibility of an American attack, warning that such a move would risk triggering more violence in the region.


"The basic repercussion would be a ball of fire that would burn not only Syria but the whole Middle East," al-Zoubi said in an interview with Lebanon-based Al-Mayadeen TV. "An attack on Syria would be no easy trip."


"Sending warships will not solve the problems but will worsen the situation," Arakji said in comments carried by Iran's Arabic-language TV Al-Alam. He added that any such U.S. move does not have international backing and that Iran "rejects military solutions."


In France, Doctors Without Borders said three hospitals it supports in the eastern Damascus region reported receiving roughly 3,600 patients with "neurotoxic symptoms" over less than three hours on Wednesday morning, when the attack in the eastern Ghouta area took place.


The Britain-based Syrian Observatory for Human Rights said Saturday that its estimated death toll from the alleged chemical attack had reached 322, including 54 children, 82 women and dozens of fighters. It said the dead included 16 people who have not been identified.

Posted by Steve Douglass at 3:26 PM No comments: