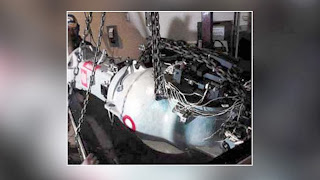 The truck was transporting cobalt-60 from a hospital in the northern city of Tijuana to a radioactive waste storage facility when it was stolen in Tepojaco near Mexico City Monday, the International Atomic Energy Agency said in a statement. Cobalt-60 is a radioactive isotope and was being used in radiotherapy.


Mexican authorities are conducting a search for the material and have issued a statement to alert the public, the IAEA said.


The truck is a white Volkswagen Worker with license plate 726-DT-8, Mexico's National Commission for Nuclear Security and Safeguards said.


"At the time the truck was stolen, the source was properly shielded. However, the source could be extremely dangerous to a person if removed from the shielding, or if it was damaged," the IAEA said in the statement.


There was no indication from officials that the truck was headed for the U.S.


U.S. law enforcement and Department of Homeland Security officials are aware of the theft and working closely with Mexican authorities, a U.S. official briefed on the situation told ABC News.


Border officials armed with radiation detection devices have been alerted. It is unclear who stole the material and if they know what they have, the official said.

Cobalt-60, which is primarily used in medical treatments, cannot be utilized in a conventional nuclear weapon; however, it could be added to a "dirty bomb." Such a device could potentially spread the radioactive material over a wide area.

An official at the U.S. Department of Homeland Security said the agency was in close communication with authorities south of the border and "will continue to closely monitor this situation."

The International Atomic Energy Agency, which has stepped up calls on member states to tighten security to prevent nuclear and radioactive materials from falling into the wrong hands, made no mention of any such risk in its statement on Wednesday.

The IAEA also did not give details on how much radioactive material was in the vehicle when it was seized. Inside a teletherapy device, cobalt-60 is used to treat cancer.

"At the time the truck was stolen, the (radioactive) source was properly shielded. However, the source could be extremely dangerous to a person if removed from the shielding, or if it was damaged," the IAEA said in a statement.

The IAEA has offered to assist Mexican authorities in the search.

Cobalt-60, the most common radioactive isotope of the metal, has many applications in industry and in radiotherapy in hospitals. It is also used for industrial radiography to detect structural flaws in metal parts, according to the U.S. Environmental Protection Agency.

In 2000, three people died in Thailand after a cobalt-60 teletherapy unit was sold as scrap metal and ended up on a junkyard. About 1,870 people living nearby were exposed to "some elevated level of radiation," according to an IAEA publication.

About the same time in Mexico, homes built with metal rods that had been contaminated by stolen cobalt were destroyed, a spokesman for the attorney general's office said.

"Cobalt-60 has figured in several serious accidents, some of them fatal," said nuclear expert Mark Hibbs of the Carnegie Endowment think-tank. "If dispersed, cobalt-60 or other radioactive source material could cause radiation poisoning locally."

More than 100 incidents of thefts and other unauthorised activities involving nuclear and radioactive material are reported to the IAEA annually, the U.N. agency said this year.

It is rare, however, that it makes any such incident public.

Because radioactive material is regarded as less hard to find and the device easier to make, experts say a dirty bomb is a more likely threat than a nuclear bomb in a terrorist attack.

Experts say a dirty bomb carries more potential to terrorise than cause a large loss of life.

At a nuclear security summit in 2012, IAEA Director General Yukiya Amano specifically singled out cobalt-60 among radioactive sources that could be used for such bombs.

"A dirty bomb detonated in a major city could cause mass panic, as well as serious economic and environmental consequences," Amano said, according to a copy of his speech.