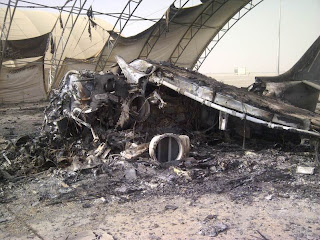 New details have emerged of the large-scale response to a Taliban attack last week on Camp Bastion in Afghanistan's Helmand province.
The BBC has been given exclusive access to the US Marines and Royal Air Force gunners who were involved in the counter-attack.
The Taliban attackers who broke through Camp Bastion's perimeter chose the darkest night of the year to launch their assault.
They quickly made their way to the US Marine Harrier flight line.
They were dressed in American army uniforms but, instead of boots, they wore training shoes.
Their beards were another give-away, but the darkness meant that the coalition forces on the base only realised they were insurgents when they opened fire.
In quick succession, they fired rocket-propelled grenades at eight Harrier jump jets under canvas hangers, destroying six and damaging two.
Trained riflemen
Capt Kevin Smalley of Marine Attack Squadron 211 had just finished a combat mission when he heard the first explosion.
Every Marine, whether a mechanic or pilot, is a trained rifleman.He said: "I didn't get a good bead on how many enemy were out there because it was very smoky and there were a lot of flames and explosions as our rounds were cooking off. But I could see at least one enemy from my position, as I secured the area."
Squadron Commander Lt Col Chris Raible ran 150 metres across open ground under fire. He was carrying only his service pistol.
As he lay down, shooting at the insurgents, a rocket-propelled grenade exploded nearby, killing him.
Sgt Bradley Atwell was also killed by an RPG as he pushed forward with a counter-attack.
Capt Smalley said: "Lt Col Raible was one of the best Harrier pilots we have in the entire fleet... He wrote on many of the tactics and techniques that the Harrier uses."
Firefight
Bastion is one of the biggest camps in Afghanistan - its perimeter is 37km in length.
It appears the Taliban got close to the perimeter through a network of dry river beds that run along the camp perimrter.

Although Bastion is in an area of desert, the surroundings are not uninhabited.

The Royal Air Force's 51 squadron, the base's quick response force, crossed the runway in two heavily-armed, Coyote open-topped vehicles.
A four-and-a-half hour long firefight then ensued.
Sgt Roy "Doc" Geddes was one of those leading the counter-attack.
"This is something we weren't expecting, the base is quite well defended," he said.
"Obviously they've found the weak point, and managed to exploit that and get on to the base, but once they were on they were dealt with effectively and quickly."
The airfield's four fire appliances made their way to the site (nearby fuel pits had also been set alight). They needed to be resupplied with water three times.
"The flames were about 100ft," said Sgt Simon Allsop, watch manager of the Red Watch in Camp Bastion's fire section.
"And there were more flames from the Harriers, there were large thuds going off, explosions going on, obviously from rocket attack.
Attack helicopters were called in too - from Prince Harry's squadron. The Prince was not involved in the counter-attack: he was taken to a secure location on the base.
American helicopters killed the three remaining Taliban, who had hidden behind concrete blast walls. In total 14 were killed, and one was injured.
Their tactics bore all the hallmarks of the Haqqani network, a Taliban affiliate based in Pakistan.
At Bastion, military sources were not commenting, an investigation is underway.
The one surviving insurgent is believed to be undergoing treatment at Bastion's hospital.
Within hours of the attack, parts of the Bastion runway were operational again.
Two new Harriers arrived at the base earlier this week; four more will follow shortly.
The two that weren't destroyed by the Taliban will be returned to the US for extensive repairs.

More on this story at the BBC HERE
Posted by Steve Douglass at 11:14 AM No comments: