Todays excerpt from "The Interceptors Club & the Secret of the Black Manta.

SEE SPECIAL OFFER AT THE END OF THIS POST!

“Actually this is pretty straight up program. Works like a flight simulator. If we had decent joystick and a transmitter we could fly her.” Sami said.

“I have a better one at the house.” Sami said. “It has full throttle controls and foot pedals.”

“Just see if these will work.” Freaks said.

“Okay. I’ll put it in simulation mode only.” Sami said.

“Yes. You can fly her in manual mode like a pilot or just enter in GPS way-points to a target.”

The Interceptors sat in the dark staring at the screen on Static’s home computer. Just in case, they had drawn all the blinds and curtains lest someone see them exploring a Top Secret military computer program.

Caysi was busy reading pages from the flight manual they had just printed out. It was huge, over 500 pages and took seven ink cartridges and over two hours to print.

Each time they ran out of ink, Static sent Meinrad to the computer store with some of Pepper’s cash.

BUY THE BOOK TODAY on SMASHWORDS at a special introductory price of only $7.99!
This is a limited time offer and expires soon. Use coupon code: CQ62L
Posted by Steve Douglass at 6:10 AM No comments:

To this end, top special operations officials are starting to flesh out what such a craft will look like. While the current fleet of special ops airframes is derived from venerable troop transport planes and helicopters designed in the mid- to late 20th century, such as the C-130 Hercules and CH-47 Chinook, a custom-designed aircraft built for delivering troops on clandestine missions may become necessary, said Michael Vickers, U.S. assistant secretary of defense for special operations, said earlier this year.

The reason, he said, is the rise in advanced air defense systems being developed and sold by Russia and China to nations throughout the world. These systems are capable of defeating all but the latest in stealth technology.

The Pentagon's 2006 Quadrennial Defense Review (QDR) emphasized expanding the number of special operations ground troops, and the 2010 QDR called for a corresponding buildup in special ops airlifters. However, the 2006 document only focused on replacing the decades-old MC-130E and P fleet of airlifters with the new J-model MC-130 to fly under enemy radar and deliver special operations troops to clandestine location.

While these planes feature terrain-following radar and advanced countermeasures, they have a fundamentally unstealthy design dating to the 1950s. The Pentagon will likely look "pretty hard" at this issue in the 2014 QDR, according to Vickers, who acknowledged that such an aircraft would be expensive.

One expert, however, said the command will have a difficult time securing the massive funding needed to develop a special ops-specific stealth airlifter.

SOCOM "is purchasing smaller aircraft to fly low and stealthy, and unless they get a whole lot of development cash for an all-new airplane, that's probably the way to go," said Richard Aboulafia, an analyst with Teal Group, Fairfax, Va. "In terms of actually buying some super-secret, penetrating, stealth transport, that's where the budget just runs out."

The command historically has relied on existing technology, both military and civilian, and investing in high-tech modifications to customize it for demanding missions, rather than pouring millions or billions of dollars into developing special ops-specific aircraft.

SOCOM has "never been able to fund their own SOCOM-specific airplane," Aboulafia said. "The idea of starting with something that would be extremely expensive to develop, that's unlikely."

Aboulafia pointed out that in the past few years, Air Force Special Operations Command (AFSOC), the U.S. Air Force's contribution to SOCOM, has begun investing heavily in small single- and twin-engine planes, sometimes painted in civilian livery such as the Pilatus PC-12. These aircraft are being purchased to deliver special operations troops around the world without drawing the attention that the four-engine C-130 would garner.

In many cases, these aircraft, some of which are based on old Soviet designs such as the Polish-built M28 Skytruck, can be parked on foreign airport ramps without giving away the U.S. presence, according to AFSOC officials. The command has even contemplated buying twin-engine deHavilland Canada Dash-8 turboprops to haul troops around the world.

The Dash-8 style aircraft could be used to transport special ops troops and gear to a main staging area in far-off regions, while the smaller planes could fly the troops on missions into primitive airstrips or through sensitive airspace under what AFSOC officials have described as a hub-and-spoke system.

Using such small aircraft while developing more advanced tactics to evade radars will likely be the key to overcoming enemy defenses while slipping special operations troops into unfriendly countries.

"In the littoral area, that's why we have SEAL delivery systems; inland, well, you'll just have to find ways to fly below the radar or between gaps in coverage," the analyst said.

One possible alternative would be for the command to partner with the Air Force to develop a new generation of stealthy transport aircraft, similar to the way it did with the V-22 Osprey, used by the U.S. Marine Corps and AFSOC, Aboulafia suggested.

Still, "I'm not so sure why the Air Force would pay for that," he added. ■
Posted by Steve Douglass at 5:32 AM No comments: 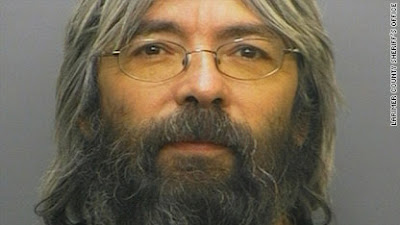 Intrigue over Gary Faulkner’s one-man hunt for Osama bin Laden has sparked both outrage and praise on the internet and blogosphere.

Pakistani authorities announced this week that they had picked up the 50-year-old Colorado man near the border with Afghanistan. Armed with a pistol, sword, night-vision equipment and Christian literature, Faulkner told police that he had been hunting bin Laden since the September, 11, 2001 attacks.

Some have dismissed him as mentally unstable, which his brother, a physician, has denied.

But others have lauded his attempt to do what the U.S. government has failed to do for nearly a decade: find the head of al Qaeda, which carried out the worst terrorist attack on U.S. soil.


Faulkner’s exploits have inspired a slew of nicknames on Twitter and Facebook, including Rambo, American Ninja and the new Chuck Norris.

He’s even been turned into an animated character on YouTube.

“Ask #GaryFaulkner to swim to the sea floor and plug the hole with his fist,” @HerbCarmen posted.

Faulkner’s family is taking it all in stride.

“I do like American ninja, that is pretty cool,” Scott Faulkner said

He said he believed his brother’s mission has tapped into an element of American society.

But not all of the internet chatter has been favorable. “Looney Christian warrior” pops up a lot. Scott Faulkner admits his brother’s plan is not something he would attempt, but he insists that Gary is perfectly sane.

“Having known Gary for 43 years I can honestly say he’s not a sociopath, he’s not psychotic, he’s not crazy. He hasn’t harmed anyone.” Faulkner said. “He is an American hero.”

He predicts that Gary will enjoy the media attention when he returns to the United States and suggests who should play the lead role if his brother’s his story ever becomes a movie:

“Jackie Chan with a wig,” Faulkner said. “He’s got the sense of humor and the physical ability.”


Post by: CNN All Platform Journalist Jim Spellman
Filed under: Pakistan • Terrorism
Posted by Steve Douglass at 4:45 AM No comments: