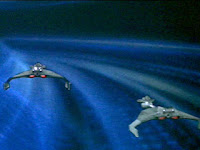 Physicists in the UK have proposed a "space–time" invisibility cloak that, if built, could be used to prevent signal interference or give the illusion of a Star Trek teleportation device.
The idea comes after four years of research by different groups that are creating devices to make objects invisible. In 2006 researchers at Duke University in the US created the first device that could cloak a small object in two dimensions in the microwave region of the electromagnetic spectrum.

Last year groups at Cornell University and the University of California at Berkeley, US, independently created 2D cloaks that operated at optical wavelengths. Then, earlier this year, a team at the Karlsruhe Institute of Technology in Germany went one step further to produce a 3D optical cloak.
The latest development, by Martin McCall and colleagues of Imperial College, London, and the University of Salford, might see cloaks add yet another dimension to their capability: time. The idea is to create a tunnel through which an object could perform an action – move or change shape, for example – while appearing as though it is doing nothing at all.
A boon for thieves?

"It means that you can allow an object to do something for a short period of time in such a way that it can't be detected," McCall told physicsworld.com. "A good way to think about it is a small piece of an object’s history just being cut out, so you would see the object suddenly jump from one place to another." In principle, says McCall, such a system would enable a thief to enter a room, steal the contents of a safe and leave the scene as it was before, while security personnel watching CCTV are none the wiser.

In practice, the device would need two transparent walls to act as the tunnel, or space–time cloak. As an object enters the cloak to perform its action, the rear wall would compress light waves passing through from a source behind. Once the object completes its action and leaves the cloak, however, the front wall would stretch the light waves passing through so that they would merge seamlessly with those outside, whose profile had not been altered.

An analogy, says McCall, is a chicken crossing a busy road. Once the chicken steps onto the road cars must stop to let it pass, but as soon as it leaves the other side the cars would accelerate to catch up with the traffic ahead. To an observer farther down the road, the stream of passing cars would display no evidence of having slowed down.


Although McCall gives safecracking as a potential for the space–time cloak, his group does have ideas for more savoury applications. In the basic set-up it might appear as similar to a transporter from Star Trek, with a person entering the cloak on one side appearing at the other side moments later, apparently having skipped the journey. But the cloak could also find uses in signal processing: a detector placed inside the cloak would be able to "pause" a signal travelling through the wall while it first deals with a signal passing through the tunnel.

All of this, however, relies on someone being able to make the device – and in particular the walls that compress or stretch light waves. McCall admits a perfect implementation "is certainly beyond current technology", but points to advances in so-called nonlinear systems: materials that change their refractive index – a property that governs light propagation speed – given illumination with strong lasers. One of the problems with this route is that changes in refractive index introduce reflections, which means the cloak, while hiding the object within, would nonetheless reveal its presence with a telling glow.

But, explains McCall, "Provided we're prepared to throw away some aspects of the cloak, we can point towards more practical, proof-of-concept experiments that are currently accessible with current technology."

The research is published today in the Journal of Optics.

Jon Cartwright is a freelance journalist based in Bristol, UK
Posted by Steve Douglass at 3:24 PM No comments:

REAT Nearly 15 percent of the world's Internet traffic -- including data from the Pentagon, the office of Secretary of Defense Robert Gates and other U.S. government websites -- was briefly redirected through computer servers in China last April, according to a congressional commission report obtained by the Washington Times.

It was immediately unclear whether the incident was deliberate, but the April 18 redirection could have enabled malicious activities and potentially caused an unintended "diversion of data" from many U.S. government, military and commercial websites, the U.S.-China Economic and Security Review Commission states in a report to Congress.

A draft copy of the report, which was viewed by the Washington Times, is to be released on Wednesday, and states that .gov and .mil websites were affected by the redirection, including websites for the Senate, all four military services, the office of the Secretary of Defense, the National Oceanic and Atmospheric Administration and "many others," including websites for firms like Dell, Yahoo, IBM and Microsoft.

Posted by Steve Douglass at 8:23 AM No comments: