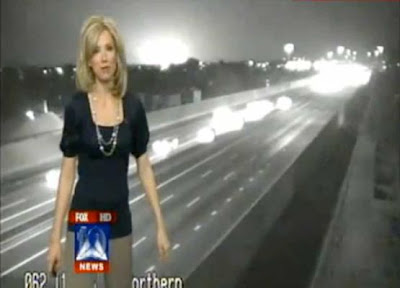 PHOENIX - A large, fleeting flash of light that appeared in the darkened skies over the northwestern edge of metropolitan Phoenix remains a mystery.

The ball of light that looked like an explosion was captured by a traffic camera on Interstate 17 around 4:45 a.m. Thursday and happened to be broadcast by KSAZ-TV when the station showed footage of the roadway during a report on the morning's commute.

The two electric utilities that serve metro Phoenix say they didn't have any reports of electric transformer explosions that might explain the flash.

Damon Gross, a spokesman for Arizona Public Service, says a blown fuse on a transformer can produce a flash, but he said the utility had no such report Thursday morning.
"It's a mystery to us as well. I can't even offer a guess," said Doug Nintzel, a spokesman for the Arizona Department of Transportation.

Charlotte Dewey, a meteorologist for the National Weather Service in Phoenix, says there was no weather activity that might explain the flash.
Messages left for officials at nearby Luke Air Force Base weren't immediately returned Friday afternoon.

KSAZ is asking viewers to come forward if they have any information about the mysterious flash.
In 1997, dozens of people saw lights in a V-formation over Phoenix, a mystery that was captured on videotape and spurred calls for a government investigation.
Posted by Steve Douglass at 6:08 AM No comments: