Taliban Vs Taliban/Dispute over who will be the next slain terrorist leader. 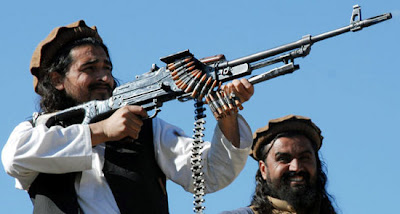 A senior Taliban commander has challenged Hakeemullah Mehsud's appointment as the new leader of the Pakistani Taliban.

Waliur Rehman Mehsud, the leader of a powerful faction of the Movement of the Taliban in Pakistan, claimed he has been selected to lead by Baitullah Mehsud, the group's former leader who is thought to have been killed in an Aug. 5 US Predator airstrike. Waliur made his statements in two interviews with the press over the past several days.

On Saturday, Waliur claimed a new leader "would be chosen within five days" during an interview with the Associate Press. Waliur did not reference the shura meeting that reportedly appointed Hakeemulah and Baitullah's replacement.

Waliur's statements are at odds with Faqir Mohammed's pronouncement on Aug. 21 that Hakeemullah Mehsud was chosen to lead the Taliban after the shura majlis, or executive council, of the Movement of the Taliban in Pakistan met in Arakzai late last week. Faqir claimed the decision to appoint Hakeemullah as Baitullah's successor was unanimous among the 42 shura members present at the meeting.

New photo shows healthier Fidel Castro: "A new photo of ailing Communist leader Fidel Castro surfaced on Sunday -- the second in 10 days -- revealing a more healthy-looking man than in prior photos. Castro, who came to power in Cuba in 1959, has not appeared in public since he had abdominal surgery in 2006.

Posted by Steve Douglass at 6:04 PM No comments:

U.S. leans on high-tech warfare in Afghanistan: "FORWARD OPERATING BASE SPIN BOLDAK, Afghanistan — Sgt. 1st Class Gregory Henson goes out on patrol with a computer on his back and a joystick in his holster. He also carries a rifle, but the military is hoping he’ll soon have less need for it.A wired generation of U.S. soldiers is about to battle-test a high-tech weapon calculated to reduce civilian casualties in Afghanistan.A key component is the ‘Dragon Egg,’ a softball-sized robotic camera that can be thrown over a hill or into a building without endangering troops. It rights itself like a Weeble Wobble toy and delivers a 360-degree view through its four tiny cameras. If any innocents are in the area, the soldier can mark the spot using his backpack computer to ward off an air strike.‘You don’t have to enter a room. You don’t have to worry about the first man in the room,’ said Sgt. Mike Fraser, who has been trained on the use of the cameras made by La Verne, Calif.-based Octatron Inc.The idea is to bring down the Afghan civilian death rate, which is stoking public anger and draws denunciations from President Hamid Karzai after each incident.In one of his first actions since taking over as head of U.S. and NATO forces in Afghanistan, Gen. Stanley McChrystal issued a tough new rule on airstrikes: If there’s any chance of endangering civilians, back off, even if it means the Taliban get away.With the new technology, ‘we can put a no-fire area over a mosque or a school,’ said Col. Harry Tunnell, commander of the 5th Stryker Brigade that deployed to southern Afghanistan this summer as part of the 21,000 additional U.S. troops ordered in by President Barack Obama.The Fort Lewis, Wash.-based brigade is putting the computer system, called ‘Land Warrior’ by manufacturer General Dynamics, into its first large-scale use in Afghanistan, distributing it to vehicle commanders or other team leaders, meaning it will be carried by about one in every five or seven soldiers in the brigade of more than 5,000 people. Each combat platoon of a few dozen soldiers will all receive a Dragon Egg kit.Land Warrior comes with a viewfinder that drops over a soldier’s eye and displays an aerial map marked with roads and towns, along with icons designating hostile forces and civilians. Soldiers pinpoint locations with satellite data and type notes into the system using a thumb keyboard that looks like the sliced-off bottom half of a Blackberry.Satellite and radio links then spread the data between Stryker assault vehicles, aircraft and foot soldiers wearing the computers. If a soldier marks a vehicle or a house, it is seen instantly by anyone else in the brigade who has the system.The 5th Stryker Brigade soldiers started training with the system in June, about a month before they deployed.It isn’t perfect. Too much information can swamp the computer screens, for instance when blue dots that pinpoint a U.S. force’s whereabouts become so numerous that they merge into one large dot — a ‘blue booger’ in soldiers’ parlance.Also, the computer adds eight pounds to a soldier’s standard 45 to 55 pounds of equipment. But Lt. Sam Bonnette says he likes ‘that I know where my guys are at on the ground.’Some soldiers are retrofitting the gear, sticking computers designed to sit inside body armor into backpacks so they can swing on and off easily. None of them has yet used the equipment in battle, so it’s still a collection of fun or cumbersome gadgetry, depending on which soldier you talk to.The soldier-mounted system was used by one battalion in Iraq, but never in Afghanistan, says Maj. James Dooghan, the brigade’s executive officer.The system used in Iraq weighed at least 10 pounds and involved a lot more parts. It also lacked full GPS capabilities and didn’t have the thumb-keyboard to send text messages, said Roger Spears, who manages the Land Warrior program for General Dynamics.Coupled with the growing use of pilotless planes, Land Warrior highlights the changing nature of 21st century warfare. It comes at a time when Marine commanders are saying killing the Taliban is a lesser priority than winning friends among the civilian population — a major paradigm shift for a force that prides itself on its ability to fight.Lt. Col. William Clark, commander of the 8th Squadron, 1st Cavalry, which is heading to this southeast town on the Pakistan border, put it this way: ‘My goal is not to go to Spin Boldak and shoot everything I see. I lose by doing that.’———Associated Press Writer Fisnik Abrashi contributed to this report from Helmand province, Afghanistan."

Posted by Steve Douglass at 6:03 PM No comments: