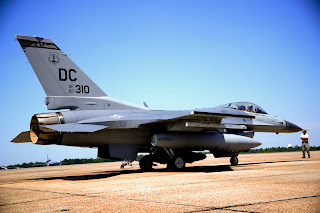 The Coast Guard rescued an Air National Guard pilot after his plane went down off the Virginia coast overnight, authorities said Friday morning.


According to officials, two F-16C Falcon fighters assigned to the 113th Wing D.C. Air National Guard were on a routine training mission off the coast of Chincoteague Island when they collided in mid-air sometime before midnight.


One pilot was able to fly his plane back to Joint Base Andrews in Prince George’s County, while the other pilot ejected from his aircraft.

Coast Guard personnel received an automated distress signal from the ejection seat about 10:30 p.m. Thursday and dispatched emergency crews aboard an MH-60 Jayhawk helicopter to assist the pilot, the Coast Guard said.

The Jayhawk crew rescued the pilot about 12:30 a.m., hoisting him from the water about 35 miles southeast of Chincoteague and taking him to Joint Base Andrews. Both pilots were treated on the base with minor injuries.

Coast Guard officials said in a news release that the pilot who ejected was in “good condition” and that the cause of the collision remains under investigation.


Posted by Steve Douglass at 9:47 AM No comments: