The Electronic Frontier Foundation Thursday opened what attorney Kevin Bankston called the "second front in our battle to stop the NSA's illegal surveillance of millions of ordinary Americans," with a lawsuit targeting top administration officials who approved or implemented the National Security Agency's program of warrantless surveillance. At the heart of the suit is a surprising and complex question that legal experts say remains radically unsettled: Can a computer eavesdrop?

The first front in this fight is EFF's ongoing lawsuit against telecom firms believed to have participated in the NSA program, which the group once thought would be the quickest way to get at the underlying question of whether the NSA program was itself lawful. But that litigation spurred Congress to pass the FISA Amendments Act this summer, granting retroactive immunity to the defendant companies, provided the Attorney General certifies that they received assurances from the government that the surveillance was lawful. While EFF believes the immunity provision to be unconstitutional, Bankston acknowledged in a press teleconference this afternoon that "litigating that question is going to slow us down." They've therefore decided to cut out the middleman and target the government directly.

The new suit, Jewel v. NSA, seeks both injunctive relief—the cessation of the program and the destruction of records obtained through it—and civil damages from the officials most responsible for the program. EFF's complaint alleges that the program violates the Constitution, the Foreign Intelligence Surveillance Act, the Wiretap Act, and the Stored Communications Act. Bankston believes the new suit is likely to be shunted to the docket of California judge Vaughn Walker, who has heard both the consolidated telecom lawsuits and a number of other cases implicating the NSA program.


President Bush is a named defendant
In addition to government agencies—the Department of Justice and National Security Agency—the lawsuit names a number of administration officials as defendants, in both their official capacities and as private individuals: President Bush, Vice President Dick Cheney, Cheney's chief of staff David Addington, as well as the the attorneys general, NSA directors, directors of national intelligence, and an indeterminate number of unknown "John Does" who played some role in authorizing and implementing the warrantless wiretapping. Bankston said that EFF is asking for civil damages from all of these officials—with the exception of the president, who enjoys immunity from civil liability for actions in office—in order to secure "personal accountability from the architects of the program, and to provide a strong incentive against future lawbreaking by these or other government officials."

The plaintiffs are the same as those in the telecom case, Hepting v. AT&T, with one more added for good measure. All are ordinary citizens of a "nationwide class of customers of all AT&T residential phone and internet service providers," and their standing to bring suit relies not on any contention that they were specific targets of NSA surveillance, but on the claim that the government was indiscriminately vacuuming up vast quantities of data, to be filtered by the government according to algorithms known only to them.

This claim rests in large part on evidence provided by AT&T whistleblower Mark Klein, who has provided documentation attesting to the existence of a secret room in AT&T's Folsom Street facility in San Francisco, where fiber optic cables were diverted through a sophisticated Narus traffic analysis machine. As EFF attorney Cindy Cohn notes, this is a hub facility through which both purely domestic and international traffic are routed, whereas a program targeting exclusively international or domestic-to-foreign communications should be situated at the point where "the wire hits the beach." The Folsom Street room is believed to be only one of many similar interception stations. According to a March report in the Wall Street Journal, "current and former intelligence officials confirmed a domestic network of hubs, but didn't know the number."

This is where things get murky.

The case EFF plans to make—and, indeed, their plaintiffs' standing to bring suit—rests on the premise that the wholesale diversion of domestic communications to the government's filtering device in itself constitutes a search or seizure beyond the bounds of both the Fourth Amendment and federal wiretap statutes—including the new FISA Amendments Act, which gave the Attorney General broad discretion to authorize the collection of communications, including domestic-to-international communications, provided the "target" of the investigation is a foreign person or group.

But the government has never accepted that premise. During the 2000 controversy over the FBI's use of (now superseded) packet-sniffing software dubbed "Carnivore," officials argued that the ephemeral copying of data into memory for the purpose of filtering out targeted material did not itself impinge upon privacy interests. Sifting that took place "inside the box" did not amount to a Fourth Amendment "search" until data was actually recorded in a human-readable form.

Judge Richard Posner applied this argument to still more intrusive data mining practices in a much-discussed 2006 article in The New Republic. "A computer search does not invade privacy or violate FISA, because a computer program is not a sentient being," wrote Posner. "But, if the program picked out a conversation that seemed likely to have intelligence value and an intelligence officer wanted to scrutinize it, he would come up against FISA's limitations."
Posted by Steve Douglass at 7:55 PM No comments: 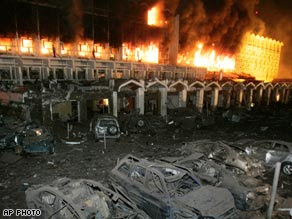 ISLAMABAD, Pakistan (CNN) -- A car bomb detonated Saturday night in the heart of Islamabad, killing at least 20 people and wounding at least another 20, police said.


Rescue workers pulled bloodied victims from vehicles, and other casualties could be seen in the street. Officials predicted the casualty tolls would rise.

GEO TV's Hamid Mir, who was at the explosion site, said he saw at least 52 bodies. Most of the fatalities appeared to be drivers who were waiting with their cars outside the hotel, and hotel staff -- most of them security guards.

Mir said a witness saw the gates of the hotel rammed open by a small car, followed by an explosive-laden truck that detonated.

The blast caused a natural gas leak that set the top floor of the five-story, 258-room Marriott Hotel on fire. The blaze quickly engulfed the entire structure. More than a dozen cars were reduced to twisted steel. Watch firefighters battle fire at hotel »

Nearby trees were felled by the blast, which occurred hours after newly elected President Asif Ali Zardari addressed a joint session of Parliament and promised to root out terrorism.

Video showed a deep crater in the pavement where the bomb is thought to have detonated.

At the CNN bureau, more than two miles from the hotel, the explosion sounded like it occurred just outside, said CNN's Reza Sayah, who was at his desk at the time.

"All of a sudden, the bureau roared and rumbled," he said. "It was a roaring rumble that would not stop. Seconds later, the windows shattered."

The Marriott, a Western brand-name hotel, has been the site of attacks in the past.

Located near the diplomatic section of the city and heavily guarded by police and military, the facility is popular among tourists. Any car entering the facility is searched, its underside scrutinized for bombs, before it is allowed to pass through heavy steel gates.
Posted by Steve Douglass at 9:04 AM No comments: