"You'd better cry or I'll give you something to really cry about!"

VP Biden says Tailban is not the enemy? 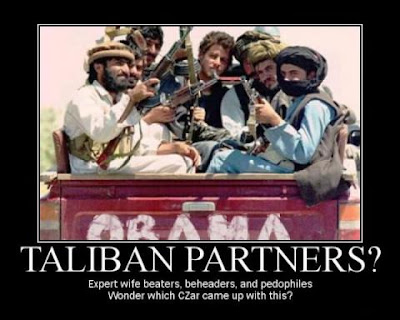 The White House on Monday defended Vice President Joe Biden for saying that the Taliban isn't an enemy of the United States despite the years spent fighting the militant Islamic group that gave a home to Al Qaeda and its leader Usama bin Laden while he plotted the Sept. 11 terror attacks.
"It's only regrettable when taken out of context," White House spokesman Jay Carney said of the vice president's remarks in an interview published Monday.

During Biden's interview with Newsweek last week, the vice president said it's "good enough" for the U.S. if Afghanistan stops being a "haven for people who do damage and have as a target the United States of America" and its allies. He added that the U.S. is supportive of a reconciliation process between the Afghan government and the Taliban even if it's questionable whether a reconciliation is possible.

"Look, the Taliban per se is not our enemy. That's critical," Biden said. "There is not a single statement that the president has ever made in any of our policy assertions that the Taliban is our enemy, because it threatens U.S. interests. If, in fact, the Taliban is able to collapse the existing government, which is cooperating with us in keeping the bad guys from being able to do damage to us, then that becomes a problem for us."

Biden said that the U.S. is on a dual track in Afghanistan -- keep the pressure on Al Qaeda and support a government that is strong enough to "negotiate with and not be overthrown by the Taliban."

Indeed, the U.S. entered Afghanistan just weeks after the Sept. 11, 2001, terror attacks that killed nearly 3,000 Americans to rid the country of Al Qaeda, whose leader had been an invited guest and offered safe haven for years by the Taliban government that ruled Afghanistan with an iron fist.

Today, fewer than 200 Al Qaeda terrorists reportedly remain in the country. But military officials say the primary attacks against U.S. forces in Afghanistan are being conducted by fighters loyal to the Taliban and the Taliban-tied Haqqani network, both of which are based out of neighboring Pakistan and freely cross the treacherous border.

According to Reuters, U.S. officials are hopeful that 10 months of secret negotiations with Taliban insurgents will soon result in a breakthrough that will allow the U.S. to leave Afghanistan as scheduled by 2014 without leaving the country to the whims of the hardline group.

Reuters reported Sunday the deal the U.S. is considering would include a prisoner release of Taliban detainees in Guantanamo Bay in exchange for a renunciation of violence and international terrorism, part of reconciliation talks with the government headed by Afghan President Hamid Karzai.

The U.S. also would offer unequivocal support for establishing a Taliban office in an Islamic country that it could use as a diplomatic headquarters, Reuters reported, and would demand preconditions such as a renunciation of violence, a break with Al Qaeda and respect for the Afghan constitution.

Carney said Monday that the U.S. has been clear that those conditions "would need to be met."
Republican presidential candidate Mitt Romney said Biden's remarks -- as well as Biden's and President Obama's belief that the Taliban are not the enemy -- are "bizarre, factually wrong and an outrageous affront our troops carrying out the fight in Afghanistan." He said the comments also reflect the administration's policy of "appeasement."

"The Taliban harbored the terrorists who killed 3,000 Americans on Sept 11. The Taliban continues to wage war against us and our allies, a conflict in which we have lost over 1,800 troops. The Taliban receives arms and training from Iran. And the Taliban seeks to reinstate a tyrannical government that violently rejects basic notions of human rights and oppresses minorities. The Taliban is clearly a bitter enemy of the United States," Romney said in a statement late Monday.