Nicholas takes on pirates and is no saint! 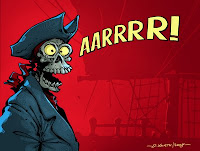 CNN) -- A group of suspected pirates was captured Thursday after attacking a U.S. Navy frigate in the Indian Ocean, according to a statement released by the U.S. Sixth Fleet.

The USS Nicholas reported taking fire from a suspected pirate skiff shortly after midnight local time west of the Seychelles, the statement said. The Nicholas quickly returned fire and began pursuing the skiff, which was eventually disabled. A boarding team from the Nicholas subsequently captured and detained three people, the statement said.
The team discovered ammunition and several cans of fuel aboard the skiff, which was later sunk by the Nicholas.

Two more suspected pirates were captured on a confiscated "mother ship," the statement said. The detainees will "remain in U.S. custody on board Nicholas until a determination is made regarding their disposition," it said.
The Pentagon is determining its next steps, and the suspects may be sent to Kenya to be tried in a piracy court there, Pentagon spokesman Bryan Whitman said Thursday

The Nicholas, based in Norfolk, Virginia, is part of the U.S. military's Africa Command.
The waters off the coast of Somalia -- the Gulf of Aden and the Indian Ocean -- have been plagued by Somali pirates over the last couple of years. To crack down on piracy, the international community has adopted measures including naval escorts and expanded monitoring.

Last week, one pirate was killed and several others were detained after a private security team thwarted an attack against a Panamanian-flagged cargo ship, the MV Almezaan. A European Union naval force was called in to assist the vessel.

New photos released Friday show what the U.S. Navy says is the aftermath of suspected pirates attacking a Sierra Leone-flagged tanker this week in the Somali Basin. 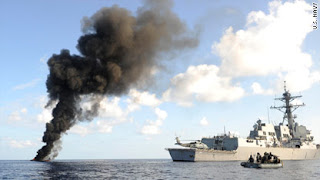 The confrontation between the MV Evita and two suspected pirate skiffs was disrupted by the U.S. Navy destroyer, USS Farragut, according to the U.S Navy. The suspected bandits’ “mother skiff” was destroyed and sunk.

“The pirates have become bolder and are attacking ships further away from the Somali shores,” said Rear Adm. Bernard Miranda of the Singapore navy.

The Evita fired flares and sped up to ward off the attackers, who were armed with rifles and rocket-propelled grenades.

Coalition forces were summoned by the International Maritime Bureau in Kuala Lumpur and the UK Maritime Trade Operations office in Dubai, who received a call of aid from the Evita.

The Evita was also assisted by a Swedish vessel, which located the suspected pirates’ skiffs and witnessed them throwing equipment overboard.

Farragut coalition forces found 11 suspected pirates aboard the skiffs, along with fuel drums and grappling hooks.

Coalition forces released the suspected pirates after making sure they couldn’t attack again.
Posted by Steve Douglass at 1:33 PM No comments: