By David A. Fulghum

The RQ-170 is a tailless flying wing whose upper surfaces have conformal sensor and/or communications pods faired into each side outboard of the centerline fuselage (Aerospace DAILY, Dec. 7).

“DarkStar didn’t die when Lockheed Martin [retired the airframe for being too small and short-ranged],” says a now-retired company executive. “It just got classified.”

The revelation of the RQ-170 comes as the Air Force’s top intelligence officer calls the need for a larger, longer-range strike-reconnaissance aircraft his number one priority.

Both events have their origins in experimental and prototype unmanned aircraft developed as a result of the internment of a U.S. Navy EP-3E electronic surveillance aircraft on April Fools’ Day 2001.

Following the landing of that damaged aircraft in China, Defense Secretary Donald Rumsfeld called a classified, all-day session of those with responsibilities for “Sensitive Reconnaissance Operations.” They discussed how to avoid future embarrassing and damaging losses of classified equipment, documents or aircrews without losing the ability to monitor the military forces and capabilities of important countries like China. Their leading option was to start a new, stealthy, unmanned reconnaissance program that would field 12-24 aircraft. Air Combat Command, then led by Gen. John Jumper, wanted a very low-observable, high-altitude UAV that could penetrate air defense, fly 1,000 nautical miles to a target, loiter for eight hours and return to base.

During the invasion of Iraq in 2003, a UAV described as a derivative of DarkStar was being prepared and was said by several officials to have been used operationally in prototype form. “It’s the same concept as DarkStar, it’s stealthy, and it uses the same apertures and data links,” said an Air Force official at the time. “Only it’s bigger,” said a Navy official. “It’s still far from a production aircraft, but the Air Force wanted to go ahead and get it out there.” The classified UAV’s operation caused consternation among U-2 pilots who noticed high-flying aircraft operating within several miles of their routes over Iraq. Flights of the mysterious aircraft were not coordinated with those of other manned and unmanned surveillance units.

There is great interest in how the U.S. now leverages its black and white world UAVs and remotely piloted aircraft to maintain a watch over the vast and rugged areas of Afghanistan with a relatively small NATO force. The revitalized conflict in Afghanistan will be largely a ground war with airpower serving as flying artillery, rapid off-road transport and as a wide-ranging reconnaissance force.

A pivotal test will come in the next 18 months as about 150,000 U.S. and allied troops try to break the offensive capabilities of the Taliban and al Qaeda in Afghanistan, with new technologies being brought into play. The rest will involve the Air Force’s investment in advanced technologies.

“We cannot move into a future without a platform that allows [us] to project power long distances and to meet advanced threats in a fashion that gives us an advantage that no other nation has,” says Lt. Gen. Dave Deptula, deputy chief of staff for intelligence, surveillance and reconnaissance. “We can’t walk away from that capability.”

For example, surveillance aircraft can see a lot more, farther and better with technologies like long wave infrared if the platform can operate at 50,000 feet or higher. In comparison, the RC-135S Cobra Ball, RC-135W Rivet Joint and E-8C Joint Stars manned surveillance aircraft are all limited to an altitude of less than 30,000 feet — and sometimes well under.

PHOTO LINK
Posted by Steve Douglass at 7:57 PM No comments: 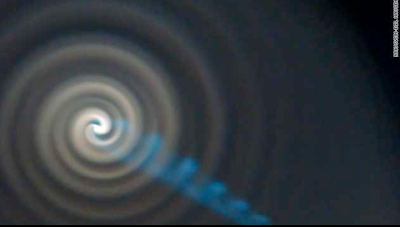 CNN) -- A strange swirl of blue light seen in the morning sky above Norway on Wednesday is being linked to a failed Russian missile test.

The phenomenon could be seen all over Norway with witnesses describing a swirling light which filled the sky around 8.00 a.m. local time (2.00 a.m. ET), which then seemed to explode.
The Russian Defense Ministry has confirmed the Russian Navy launched a Bulava ballistic missile on the same day, but has declined to make any connection with the lights seen over Norway.
It confirmed the missile was fired from the "Dmitry Donskoi" nuclear submarine, but would not comment on the submarine's location at the time of launch.

Truls Lynne Hansen, the head of Troms Geophysical Observatory in northern Norway told CNN missile launches were a common sight in the area.

"We have seen rockets being launched from north-west Russia, and the rocket range in Kiruna in northern Sweden, and from the neighboring Andenes in northern Norway, but nothing like this," Hansen said.

"Normally we see the second stage of the rocket burning then it disappears. This was something very unusual," he added.
In a written statement, the Russian Defense Ministry said the missile failed in the third stage of its trajectory.

"Unstable work of the engine of the [missile's] third stage was detected by the monitoring systems," the statement said. "The causes of the technical error are being established by a state commission."
Erik Tandberg, a consultant to the Norwegian Space Center, said the agency had been inundated with calls about the origin of the swirling light.

Within hours he said the agency had concluded that it was a failed Russian missile.
"It was almost certain that it was a Russian military rocket and missile," Tandberg told CNN. "From the first call in the morning yesterday, I think it took about two or three hours until we saw the photographs that it became clear to most people what was involved."

Early theories floated on the Internet included an Alien visit or something related to U.S. President Barack Obama's visit to Oslo on Thursday to collect his Nobel Peace Prize.

"I think it was clear to most people that it was not a UFO, as most people define a UFO. Of course everything is a UFO until you know what it is. But most people think about UFOs as aliens and things like that, that was something that came up very early but not later," Tandberg said.

At the Troms Geophysical Observatory, scientists measure the earth's magnetic field, including the aurora borealis, or northern lights, a natural light display seen near the northern magnetic pole.

Hansen said a combination of circumstances made the strange light clearly visible. He attributes the blue haze to gases from the missile being lit by the sun from below.

"We have no sunshine here at the moment. The sun is not rising and is just below the horizon to the east. The sky was very, very clear, cold and clear and this means that gas that was released by the rocket was lit up by the sun from beneath. That was one of the reasons it was so clear," he said.

RELATED LINK
Posted by Steve Douglass at 7:24 AM No comments: