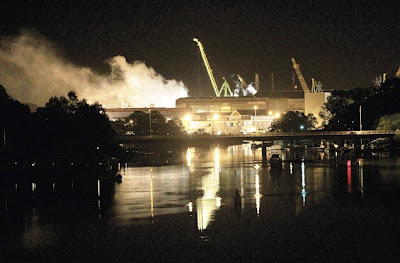 Maine — A fire on a nuclear-powered submarine at a Maine shipyard has injured seven people, including five firefighters, but did not affect the reactor, which was not active.
Crews responded at about 5:40 p.m. Wednesday to the USS Miami SSN 755 at the Portsmouth Naval Shipyard on an island in Kittery, a town near Portsmouth, N.H. It was not clear how many people were aboard the submarine at the time.
Rear Adm. Richard Breckenridge, commander of Submarine Group Two, said the fire was out Thursday morning and the shipyard was open as usual. He said the three shipyard firefighters, two civilian firefighters and two crew members received minor injuries and were in good shape.
Breckenridge called their efforts heroic, saying the extreme heat and smoke in the contained spaces made it very challenging for them. “Their efforts clearly minimized the severity of this event,” he said at a brief news conference.
Breckenridge said the fire started in the four forward compartments, which include living and command and control spaces. The sub’s reactor, isolated in another part of the sub, had been shut down for a few months at the time and was unaffected. Breckenridge said it “remains in a safe and stable condition.”
No weapons were on board.
Breckenridge said the cause of the fire is under investigation.
The USS Miami has a crew of 13 and 120 enlisted personnel. It arrived at the shipyard on March 1 to undergo maintenance work. It was commissioned in 1990 and its home port is Groton, Conn.
Read more: http://www.nydailynews.com/news/national/fire-nuclear-submarine-maine-shipyard-hurts-7-article-1.1083776#ixzz1vn34JI3cRead more: http://www.nydailynews.com/news/national/fire-nuclear-submarine-maine-shipyard-hurts-7-article-1.1083776#ixzz1vn2iTYCQ
Posted by Steve Douglass at 5:38 AM No comments: