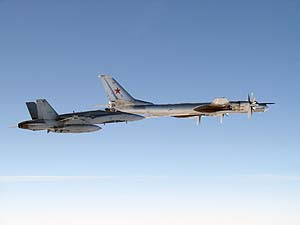 OTTAWA - Moscow and Ottawa are engaged in a war of words after Defence Minister Peter MacKay announced Friday that Canadian and U.S. fighter jets intercepted a Russian bomber and signalled it to "turn tail" over the high Arctic on the eve of American President Barack Obama's visit.

MacKay suggested the timing of the incident was suspect, but the Russians called the flight routine and indicated they were baffled by the fuss.

The announcement Friday morning of the Feb. 18 encounter raised questions about why MacKay chose to highlight it. Norad said there have been about 20 such aerial contacts between Russian and American or Canadian planes since 2007.

The Russian Defence Ministry was categoric.

Russian planes have not approached Canada's borders and Canadian authorities were informed about the flight, it said. A spokesman called MacKay's statements "nothing but farce."

No Russian aircraft actually entered Canadian airspace, but MacKay suggested the timing of the incident was worthy of note.

"Within 24 hours of the president's visit to Canada last week we did scramble two F-18 fighter planes," MacKay told a news conference.

The Canadian pilots sighted the Russian and directed it to reverse course. It did.

"They met a Russian aircraft that was approaching Canadian airspace and, as they have done on previous occasions, (the Canadians) sent very clear signals that were understood: that aircraft was to turn tail and head back to its own airspace. Which it did."

MacKay said the Russians give no warning prior to the flights, despite repeated requests to Moscow for prior notice.

"They simply show up on a radar screen," the minister said. "This is not a game at all.

Russian air force spokesman, Lt.-Col. Vladimir Drik said the flight had been planned in advance and was part of routine patrols. His statement carried by the state-owned RIA Novosti news agency said the crew acted according to international agreements and did not violate Canadian air space.

The Russian Defence Ministry also issued a statement in response to MacKay's claims.

He said the only recent flight carried out by a Tu-160 bomber took place last Wednesday.

"The statements by Canada's defence minister about flights of our aircraft are absolutely incomprehensible," Drobyshevsky said. "They are nothing but farce."

The Russian Embassy in Ottawa was closed on Friday, taking a long weekend to mark Protector of Motherland Day.

Speaking in Saskatoon, Prime Minister Stephen Harper called the incident "a real concern to us."

"I've expressed at various times the deep concern our government has with increasingly aggressive Russian actions around the globe and Russian intrusions into our airspace," Harper said.

"This government has responded every time the Russians have done that. We will continue to respond; we will defend our airspace."

The CF-18s took off from Cold Lake, Alta., after Norad detected what a Defence official confirmed was a Cold War-era, long-range Tupolev Tu-95 bomber - known as a Bear - headed for Canadian airspace

MacKay suggested the Russians may have been testing Norad's response while national security was focused on Ottawa in advance of Obama's first foreign trip since his inauguration.

"I'm not going to stand here and accuse the Russians of deliberately doing this during the presidential visit," he said. "But it was a strong coincidence, which we met with the presence, as we always do, of F-18 fighter planes and world-class pilots that know their business."

New Democrat MP Paul Dewar suggested the minister's decision to underline one incident among many is suspicious.

"The question is why is Mr. MacKay stating these things now?" Dewar said. "And where is the co-operation here that we need to see between polar countries?

"I think what Peter might be doing here is trying to go back to the '50s and play a little Cold War. Well, I'm sorry, but you know what? If he wants to play a game of Risk in his basement, that's up to him, but it has no place in terms of diplomacy."

Russian aircraft regularly encroached on North American airspace during the Cold War and Canadian and American fighters routinely tracked the snoopers and escorted them back into international airspace.

Such flights were suspended for years after the collapse of the Soviet Union, but resumed in August 2007 as Russia pushed its claim on the Arctic and oil wealth allowed the country to spend more on its military.

Pilots tend to consider the intercepts a symbol of status rather than of hostile action, often exchanging smiles while taking photographs and video at 30,000 feet or so.

"Russian long-range activity is part of their training exercises and so we do see this," said Canadian navy Lt. Desmond James, a spokesman at Norad headquarters in Colorado Springs, Colo. "We don't treat it as a hostile intent as much as a training exercise.

"On our part, we go up to make sure they know that while they are doing their training, we do know that they're there and we are watching, prepared to respond should they decide that they're going to alter their course in a threatening manner.

"We have to let the Russians - any aircraft - know that we are in a position to respond."

"While we do not speak the common language, they are trained in those common signals just as we are," said Renuart. "To date, those have been effective in deviating or deterring those aircraft from entering into either Canadian or American airspace."

The Russian pilots have been "professional" in their conduct, he added, but it's important for Canada and the United States to maintain "that solid, integrated air defence posture that we have."

A Russian lieutenant-general said when the flights resumed that the West would have to come to terms with Russia asserting its geopolitical reach around the globe. "But I don't see anything unusual; this is business as usual," he said.

Former Russian President Vladimir Putin, now prime minister, said at the time the patrols would be conducted in areas of Russian economic interest and active shipping, rather than in regions required for "deterrence of a missile-nuclear attack on Russia."

There have been "easily more than 20" such encounters since mid-2007, James said. Similar flights have occurred elsewhere.

"It's not an isolated thing," James said. "It's become more common and more prevalent throughout the world."

The Bear, which is easily recognized by its sharply swept wings and the double, counter-rotating propellers on its four engines, first flew in 1951 but experts consider it a more formidable nuclear delivery device than ever, despite its advanced age.

The Tu-95's turboprop engines give it a much lower fuel consumption than comparable long-range, jet bombers such as the Boeing B-52 Stratofortress. It can stay aloft for extended periods and can carry nuclear-tipped cruise missiles.

The commander of Russian long-range aviation, Maj.-Gen. Pavel Androsov, has said the heavy bombers do not carry weapons during such "patrols," only unarmed training missiles with the same weight and dimensions as the real ones.
Posted by Steve Douglass at 8:20 PM No comments:

As a follow-on to Douglas Barrie's post of the UK's new Defence Technology Plan, I just have to provide a link to this video, with the Ministry of Defence has just posted on youtube.

It shows a concept for the Future Protected Vehicle, which is intended to have the effectiveness and survivability of a main battle tank but supposed to be much lighter. The vehicle carries its own ducted-fan UAV. But I particularly like the illustration below from the MoD's news story on the launch of the DTP. After all, why carry a gun when you can have a little wheely thing do it for you?

Posted by Steve Douglass at 8:50 AM No comments:

Posted by Steve Douglass at 8:48 AM No comments:

Posted by Steve Douglass at 5:56 AM No comments:

The deal is also noteworthy for the fact that it indicates the U.S. is willing to share some of its'most advanced technology with close allies -- neither the EA-6B nor EF-111 jammers were exported. The EA-18G deal comes not long after the Pentagon agreed to let the U.K. buy RC-135 Rivet Joints, the highly sensitive signals intelligence system.

Australia is not buying'new Growlers; instead it'would modify 12'of the F/A-18E/Fs the country previously committed to buying under'a'A$6.6 billion program.'

‘Wiring twelve of the Super Hornets as Growlers will give us the opportunity to provide taxpayers with better value for money,’ defense minister Joel Fitzgibbon says. A final decision on buying Growlers, including the jamming kit,'is expected around 2012.

The electronic attack'modification'‘will also provide the Super Hornets with counter-terrorism capability through the ability to shut down the ground-based communications and bomb triggering devices of terrorists,’ Fitzgibbon notes.

At this point, the government is making''a A$35 million' downpayment so half of the 24 F/A-18E/Fs on order could be turned into Growlers. Making the wiring and other internal modifications now, while the fighters are in build,'is cheaper than a retrofit program, the Australian government says.'A'further A$300 million would be needed to complete the Growler effort.

Or check out the Aviation Week video here.

Posted by Steve Douglass at 5:55 AM No comments: