Federal authorities have arrested a man in connection to the suspected explosive packages discovered this week, the Justice Department announced Friday. Multiple law enforcement sources told CNN the suspect is a man and that the arrest happened in South Florida. 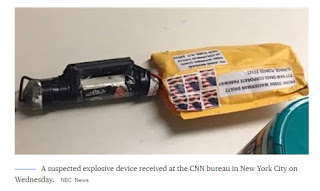 The packages are the latest to be sent to prominent Democrats and critics of President Donald Trump that were discovered earlier this week.
Posted by Steve Douglass at 8:22 AM No comments: