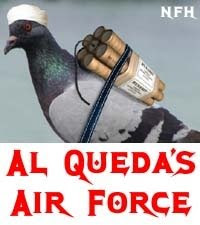 WASHINGTON — Top U.S. counterterrorism officials Monday said al-Qaida is “imploding” and that its violent tactics have turned Muslims worldwide against the organization.

“Absolutely it’s imploding. It’s imploding because it’s not a message that resonates with a lot of Muslims,” said Dell Dailey, the State Department’s coordinator for counterterrorism.

Al-Qaida still remains the most dangerous threat to the United States. But of growing concern are organizations like Lebanese Hezbollah and Hamas, which combine social services, local governance, national politics with extremist attacks, said Undersecretary of State James Glassman.

Vastly more Muslims than Westerners are killed by al-Qaida car and suicide bombs, particularly in Iraq, where local tribes have largely turned against al-Qaida in Iraq in the last two years. Extremist violence claimed more than 9,500 civilian victims in Muslim countries in 2007.

U.S. intelligence agencies caution against predicting al-Qaida’s demise too soon, noting its Pakistan safe harbor and the persistent efforts of its affiliates to conduct attacks in North Africa and elsewhere.

U.S. intelligence officials told The Associated Press in July that al-Qaida leaders learned from Iraq to temper their local activities to ensure continued access and freedom of movement throughout the organization’s safe haven in Pakistan. The officials spoke on condition of anonymity to discuss sensitive intelligence.

Some hardline religious leaders who once wielded significant influence in al-Qaida have begun to criticize its violence against civilians, said Ted Gistaro, the national intelligence officer for transnational threats, in an August speech. Gistaro said al-Qaida senior leaders have devoted nearly half their airtime this year to defending the group’s legitimacy.

Despite these apparent fissures, al-Qaida is the most potent threat to the United States, according to U.S. intelligence officials and reports. A national intelligence assessment released last year said al-Qaida had regenerated its leadership and ability to conduct attacks in the ungoverned tribal region of western Pakistan.

Afghanistan has grown increasingly violent because of the close ties and collaboration between the Pakistan tribes, the Taliban and the terrorist organization. Al-Qaida continues to attract new fighters to fight U.S. forces in Afghanistan, and radical Internet sites that provide religious justification for attacks and violent anti-Western rhetoric are spreading.

“The death-cult mentality is part of al-Qaida’s DNA. An al-Qaida that could adapt would be a far more dangerous al-Qaida,” he said.
Posted by Steve Douglass at 8:27 PM No comments: