BBC: Al-Qaeda in the Arabian Peninsula (AQAP) has said it was behind an attack on Yemen's defence ministry on Thursday that left 52 people dead.
The group's media arm, al-Malahim, said the ministry complex in Sanaa had been targeted because US unmanned drones were being operated from there.
The attack saw a suicide bomber ram an explosives-filled car into the main gate before gunmen launched an assault.
Among the dead were soldiers and civilians, including seven foreigners. 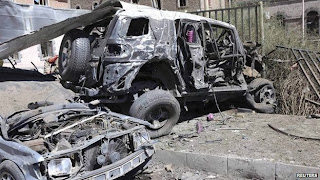 It was the deadliest attack in Sanaa since May 2012, when a suicide bomber blew himself up during a rehearsal for a military parade.
'Heavy blow'
Thursday's attack in the Bab al-Yaman district, on the edge of Sanaa's old city, began at about 09:00 (06:00 GMT) with a huge car bomb explosion at the entrance to the defence ministry's command complex, one of the government's most important security facilities.
About a dozen militants then stormed the compound, targeting civilians working at a military hospital inside or receiving treatment there.
The BBC's Shaimaa Khalil describes "plumes of smoke and gunfire" at the scene
Two doctors from Germany, two others from Vietnam, as well as two nurses from the Philippines and one nurse from India were among those killed, the official Saba news agency reported.
The Philippine foreign ministry said seven of its nationals had died.
Other civilian victims included a top Yemeni judge and his wife, and one of President Abdrabbuh Mansour Hadi's relatives.
Security forces later retook the complex after killing the attackers.
READ THE REST AT THE BBC HERE
Posted by Steve Douglass at 9:36 AM No comments:

The Air Force has long debated how to conduct penetrating intelligence, surveillance and reconnaissance missions since the venerable, high-speed SR-71 retired in 1998. But despite the need and a lingering requirement, no visible progress toward that goal was made. That’s because the highly classified aircraft – the RQ-180 – has been developed by Northrop Grumman in secret.

Amy and Bill’s report is accompanied by both an interactive timeline and a family tree, highlighting the evolution of U.S. stealth UASs.


They explain in an additional story how the new UAS fits within the context of the Air Force’s plans for a future family of aircraft capable of conducting intelligence and strike missions.


Also, don’t miss Bill’s opinion column, ‘Commander’s Intent’ from earlier this year, explaining why UAVs need stealth, and why secrecy can be counter-productive

CLICK HERE TO READ THE FULL STORY AT AVWK 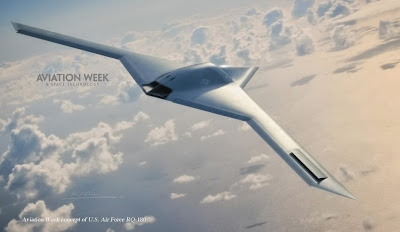 Posted by Steve Douglass at 6:18 AM No comments: