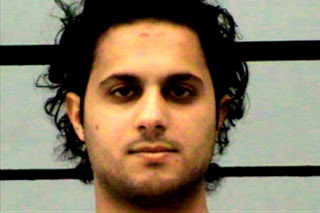 Convicted terrorist Khalid Ali-M Aldawsari was sentenced by federal Judge Donald E. Walter to life in prison without the possibility of parole this morning. Aldawsari was convicted by an Amarillo jury back in June on a charge of attempted use of a weapon of mass destruction.

KAMC 28′s Nick Ochsner covered the sentencing hearing today. He reports that both the prosecution and defense were given one final opportunity to try to sway Judge Walter’s decision for the sentence.

Lead defense attorney Dan Cogdell spent about five minutes arguing for a sentenced of less than twenty years. Cogdell told the judge other terrorists who had been convicted under similar circumstances were sentenced to shorter sentences. Aldawsari’s defense attorneys also tried to convince the judge that their client was depressed and felt like an outcast after transferring from Vanderbilt to Texas Tech University.

Jeffery Haag, who was the lead US prosecutor in the case, argued strongly for the life sentence, telling Judge Walter that Aldawsari is a threat to Americans both at home and abroad.

Authorities said the now 22-year-old Aldawsari purchased bottles of sulfuric and nitric acids, chemicals that can be combined with phenol to create a chemical explosive.

Aldawsari was a former Texas Tech University and South Plains College student. He was arrested in Lubbock in February of 2011 and his trial was delayed numerous times before getting underway this Spring. His defense team expects Aldawsari to appeal the sentence.
Posted by Steve Douglass at 12:18 PM No comments: