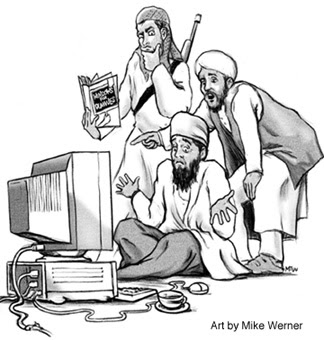 By Ellen Nakashima and Joby Warrick

Al-Qaeda’s main Internet forums have been offline for more than a week in what experts say is the longest sustained outage of the Web sites since they began operating eight years ago.

No one has publicly asserted responsibility for disabling the sites, but the breadth and the duration of the outages have prompted some experts to conclude that the forums have been taken down in a cyberattack — launched perhaps by a government, a government-backed organization or a hackers’ group.

The first Web site, Shumukh al-Islam, a primary source for al-Qaeda videos and messages, went down March 22, and since then four others have gone dark. Shumukh reappeared briefly Monday before going down again. A message claiming to be from the site’s administrators said that it would be back up “as soon as possible.”

The administrator of a second-tier al-Qaeda site recently posted a message on an online forum saying that “the media arena is witnessing a vicious attack by the cross and its helpers on the jihadi media castles.”

Officials in the United States and elsewhere have long been concerned about sites associated with al-Qaeda. Those sites have been used to call for violence against Western targets and to try to recruit Islamist extremists to carry out attacks.

There is still some uncertainty about whether a cyberattack caused the recent outages, and skeptics note that some prominent al-Qaeda forums remain online. U.S. government agencies, including U.S. Cyber Command, had no role in the outages, according to officials who would speak about the issue only on the condition of anonymity.

Still, Will McCants, a former State Department counterterrorism official who is a senior fellow at the Homeland Security Policy Institute at George Washington University, said that, given the number of sites affected and the duration of the outages, “it sure looks like a takedown.”

If it is a technical problem being addressed by site administrators, “usually they will get on another site and say we’ve got administrative problems,” McCants said

READ THE FULL STORY AT THE WASHINGTON POST
Posted by Steve Douglass at 7:40 AM No comments: