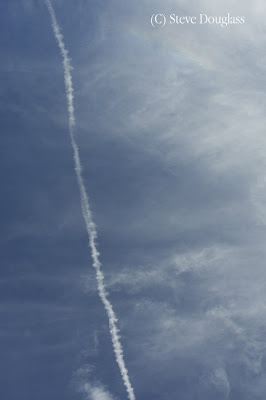 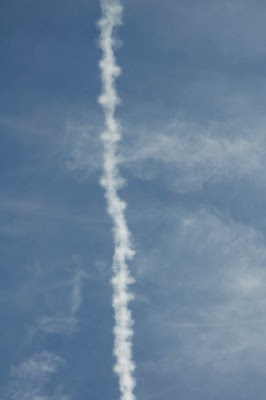 I was on my way home from Wal-Mart this afternoon when I heard a strange thumping noise - rhythmic in nature. At first I thought it might be a flat tire - but then I realized it was coming out of the sky. Then I realized what it was. It came back in a flash - a sound I hadn't heard since 1992. I looked up and saw a familiar sight. My old friend the "Pulser" was back.

It took me another five minutes to race home to get my camera. Unfortunately the high altitude winds had kind of deformed the contrail by then.

It appears the craft (PDWE?) was heading from the southwest to the east/northeast. Maybe (and I'm guessing here) it originated from WSMR. Could it be a new pulse detonation engine aircraft being tested? If anyone else (in the Texas/New Mexico) area witnessed this craft - please feel free to drop me a line.

I'm currently checking my automated scanner loggings - looking to see if I managed to capture any communications (military or otherwise) associated with this sighting. I'll let you know.

UPDATE: I checked my logs but no related military or civilian voice communications (related to the sighting) were found - most likely because the scanner was locked up for 15 minutes on 362.150 MHZ (Northstar GEP frequency) with what sounds like encrypted data. 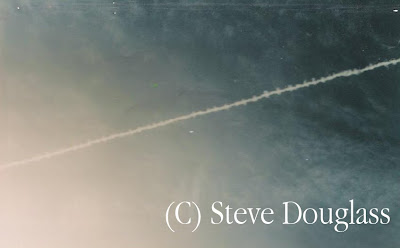 WILMINGTON, N.C. (AP) — Residents along North Carolina's southern coast say they have been rattled by unexplained booms twice in 24 hours.

The StarNews of Wilmington reported that people called emergency dispatchers in New Hanover and Brunswick counties Saturday morning to ask about the noises and to report their homes shaking.

Stoney Creek Plantation resident Brook Lasko told the newspaper that the booms felt like bombing exercises that she remembered from when she lived near Fort Bragg.

Some interesting coincidences that may coincide with the sighting:

1. The Pentagon seems to be considering terrorist targets to hit inside Yemen due to the recent spate of "printer bombs."

2. STS 133 was supposed to be in orbit this week - but was postponed until November 30 due to technical issues.

3. Sonic booms heard over the Eastern seaboard - all the while the military is denying anything was flying at the time.

4. Iran seems to be very close to fielding an nuclear weapon and international pressure is on for the U.S. to do something about it.


Photo EXIF DATA
Note all times are one hour off due to time change:

Analog video of the possible "Pulser" test flight over the White Sands Missile Range in 1997. Sorry for the poor quality and camera work but the craft was almost 60 miles away and video tape wasn't high resolution back then.

LINK: Opposing viewpoint that conrtails are NOT caused by secret aircraft.

Note: There are are a few high (normal) contrails that take on a similar appearance but the "pearls" aren't exactly symmetrical usually more prominent on one side of the main trail than the other. These are what most people see and report - and sometimes take photos of. Some debunkers point them out as proof that a pulse-detonation-wave engine was only theoretical (in 1992) and what I was photographing was just normal contrails being distorted by high-altitude winds.

However, those contrails aren't accompanied by the noise and are asymmetrical and usually don't stretch across the sky - until it runs out - with the vehicle ascending beyond the atmospheric layer that makes them visible.

Since then PDWEs have been built and tested (in the white world) and not to mention - back in 1992 - shortly after the incident I got a call from a propulsion engineer (General Dynamics) who played (on a synthesizer) modulated notes at a certain beat frequency (over the phone) and asked me which one my "pulser" sounded like. When I heard one that most closely matched - and told him so - he swore "Son of a bitch! - those f-ckers at Lockheed have done it again. They just put me out of a job."

ABOVE TOP SECRET forum on Pulse Detonation Engines
Posted by Steve Douglass at 6:08 PM No comments: