Obama want Congress to have access to classified drone info

WASHINGTON (AP) — President Barack Obama has directed the Justice Department to give Congress' intelligence committees access to classified legal advice providing the government's rationale for drone strikes against American citizens working with al-Qaida abroad, a senior administration official and Democratic lawmakers said Wednesday.A drumbeat of demands to see the document has swelled on Capitol Hill in recent days as the Senate Intelligence Committee prepares to hold a confirmation hearing for John Brennan, who helped manage the drone program, to be CIA director.Those demands were only intensified by the leak this week of an unclassified "white paper" on how decisions are made to target U.S. citizens abroad that the Justice Department confidentially sent to key lawmakers last year. The unclassified memo says it is legal for the government to kill U.S. citizens abroad if it believes they are senior al-Qaida leaders continually engaged in operations aimed at killing Americans, even if there is no evidence of a specific imminent attack.The senior official said Obama decided to send lawmakers the classified rationale on Wednesday as part of his "commitment to consult with Congress on national security matters." Obama directed the Justice Department provide the Senate and House intelligence committees access to classified advice from its Office of Legal Counsel that the white paper is based on, the official said.Legal opinions produced by the legal counsel's office are interpretations of federal law that are binding on all executive branch agencies.The administration official spoke on condition of anonymity because he was not authorized to discuss the matter by name.Earlier Wednesday, White House spokesman Jay Carney said Obama was engaged in an internal process deliberation to determine how to balance the nation's security needs with its values. He said Obama was committed to providing more information to Congress, even as he refused to acknowledge whether the drone memo even existed."He thinks that it is legitimate to ask questions about how we prosecute the war against al-Qaida," Carney said. "These are questions that will be with us long after he is president and long after the people who are in the seats that they're in now have left the scene."Eleven senators, including Democrat Ron Wyden of Oregon, called on Obama to provide lawmakers "any and all legal opinions" that outline the president's authority to use legal force against Americans.Wyden, a member of the Senate Intelligence Committee, told The Associated Press that Obama called him Wednesday evening to alert him to the decision to release the legal opinions. The president pledged to launch a "very extensive" public discussion on the government's ability to target Americans abroad, Wyden said."This is an encouraging first step," Wyden said. "There is now an opportunity to build on it."Sen. Dianne Feinstein, D-Calif., committee's chairman, said in a statement that the legal opinion would be provided to her committee by Thursday morning. The confirmation hearing will be held Thursday afternoon.Justice's unclassified 16-page white paper says that it is lawful to target al-Qaida linked U.S. citizens if they pose an "imminent" threat of violent attack against Americans and that delaying action against such people would create an unacceptably high risk. Such circumstances may necessitate expanding the concept of imminent threat, the memo says."The threat posed by al-Qaida and its associated forces demands a broader concept of imminence in judging when a person continually planning terror attacks presents an imminent threat," the document added.

READ THE REST OF THE STORY HERE
Posted by Steve Douglass at 8:55 PM No comments:

Editors note: Although the video looks authentic showing what looks like the RQ-170 landing at a forward American base (complete with temporary US military pre-fab hangars and a SOF C-130 ) it doesn't necessarily mean Iran has the capability to un-encrypt video feeds or the video stored on board the drone.

The footage shows video during the landing cycle (local radio-controlled link) and not the video usually uplinked via military satellite, which is encrypted.

None the less - it does show that Iran is making considerable strides (probably with help from China) dissecting data found on the almost completely intact RQ-170 drone and highlights severe vulnerabilities which are most likely being addressed in future UAV designs.

How about building in a self-destruct mechanism guys!


Note the addition of a dramatic sound track and stock  footage of another drone (not the RQ-170) and satellite photos (most likely Google Earth)  in this obvious propaganda video, aimed at sticking a thumb in the eye of the Pentagon.

UPDATE: I was able to match up a video still with a Google Earth image of Kandahar Air Base:

VIDEO STILL showing temporary drone shelters, Predator Drone (far left) and what looks like an Avenger  Predator (C)  in the foreground. You can also see the antenna array for (local) control of drone takeoff, landing and taxiing. 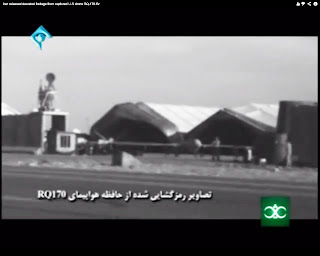 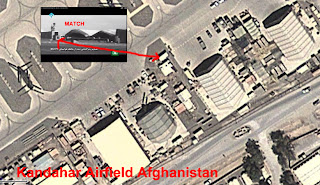 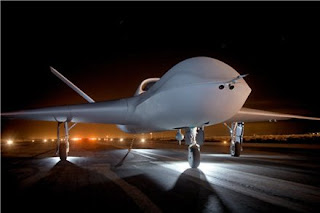 The footage also matches this video taken of drone operations at Kandahar Air Base - the shelters and buildings match. Now I just have to verify that the video is not footage from another type of drone.
Posted by Steve Douglass at 2:02 PM No comments: