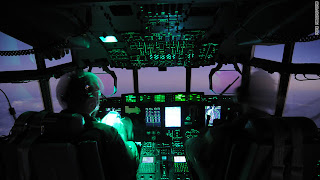 This is Commando Solo, a radio station in the sky. The long wire, kept vertical by a 500-pound lead weight, is helping transmit an AM radio signal to the people of Haiti. Four other antenna on the wings and fuselage are sending FM signals.

The U.S. government is using Commando Solo to deliver news and information to the survivors of the January 12 earthquake. During much of the day, the plane relays live broadcasts of Voice of America news call-in shows in Creole, the native tongue of Haiti.

During lulls in the VOA programming, it sends pre-recorded public service announcements, including advice on sanitation, what to do when encountering a dead body, and a warning from the Haitian government not to attempt dangerous and illegal ocean crossings to Florida in small boats.

iReporter shares view of Haiti from the sky

None of the 10-member crew aboard Commander Solo speaks Creole. But the technician who monitors the broadcast says he nonetheless can get a sense of the impact of the quake.

"You can hear in people's voices a lot of emotion, sometimes a little bit of frustration, sometimes really anxiety," said Brian. (The Air Force asked CNN to identify crew members only by first name and rank.)

"We hear a lot of people calling in trying to check in with their relatives and find out where they're at. And so it's pretty interesting just to hear it, even though I don't understand the language, the message really does come through," he said.

READ THE FULL STORY AT CNN

Posted by Steve Douglass at 10:51 AM No comments: