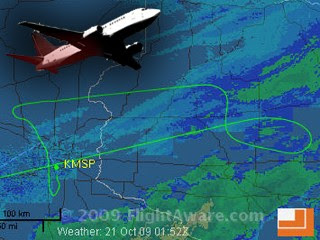 Editors note: Gird your loins Northwest - wait until Leno & Letterman get hold of this!

A Northwest Airlines flight approaching Minneapolis Wednesday night lost contact with controllers for more than an hour and overshot its destination by about 150 miles before circling back to land. Federal safety regulators are investigating the incident as a possible case of pilots nodding off, according to government and airline-industry officials familiar with the matter.

Controllers at Minneapolis-St. Paul International Airport were able to re-establish contact with the Airbus A320, after a one hour and 18 minute lapse, before the plane, flight 188 en route from San Diego, landed safely and without injuries to the 147 passengers, according to a statement from the National Transportation Safety Board.

A Northwest flight overshoots its destination by more than 100 miles, prompting questions about whether the pilots were nodding off. WSJ's Andy Pasztor and Gabriel Kahn discuss the latest developments in the inquiry in the News Hub.
The NTSB said controllers lost contact with the aircraft while it was cruising at 37,000 feet, but didn't say how far from the airport the plane was at the time.

The NTSB said the pilots were interviewed after landing by Federal Bureau of Investigation agents and airport police. The pilots told law- enforcement officials they had been engaged in a "heated discussion over airline policy and they lost situational awareness," according to the NTSB. The Federal Aviation Administration is also investigating the incident.

Northwest is a unit of Delta Air Lines Inc.

"The safety of our passengers and crew is our top priority," Delta said in a statement. "We are cooperating with the FAA and NTSB in their investigation as well as conducting our own internal investigation. The pilots have been relieved from active flying pending the completion of these investigations."

The incident comes as the FAA is seeking to update and rewrite decades-old rules governing how long commercial pilots can fly and remain on duty during a given period.

Wednesday night's incident is the second time in less than a week that a Delta cockpit crew was involved in a high-profile safety lapse. On Monday, a long-range Delta Boeing 767 en route from Brazil to Atlanta's Hartsfield International Airport landed on a taxiway, rather than the parallel runway. There were no injuries to any of the 182 passengers or 11 crew members.

The safety board is investigating whether pilot fatigue was an important factor. The crew had flown all night and was landing in darkness. The approach lights for the runway weren't turned on, however the lights on the runway surface were illuminated, according to the safety board.

Concerning the Minneapolis flight, it's not clear what the pilots' schedule was in the hours before it overshot the airport Wednesday night. But their work hours and sleep schedules in the preceding few days will be among the main issues examined by investigators.

In the case of the Delta crew that landed on the taxiway in Atlanta, the safety board said Wednesday that a third pilot aboard the twin-engine Boeing 767 had fallen ill during the flight and "was relocated to the cabin" before landing. The board said there was 10-miles visibility when the big jet touched down on the taxiway.

Earlier media reports indicated that the crew of the Boeing 767 had been temporarily removed from flying duties.

WASHINGTON (CNN) -- A passenger flight from San Diego, California, to Minneapolis, Minnesota, overshot its destination airport by about 150 miles Wednesday, and federal investigators are looking into whether the pilots had become distracted, as they claimed, or perhaps fallen asleep.

Air traffic controllers lost radio communication with the Northwest Airlines Airbus A320, carrying 147 passengers and an unknown number of crew, when it was flying at 37,000 feet, according to the National Transportation Safety Board. There was no communication with Flight 188 for more than an hour as it approached the airport, the board said.

When air traffic controllers finally made contact with the pilot, his answers were so vague that controllers feared the plane might have been hijacked, according to a source familiar with the incident.

The controllers in Minneapolis ordered the pilot to make a series of unnecessary maneuvers to convince them the pilots were in control of the flight, the source said, adding that fighter jets were poised in Madison, Wisconsin, but were never deployed. Watch how Flight 188 drama unfolded »

Controllers tracked the aircraft on radar as it flew over its intended destination -- Minneapolis-St. Paul International/Wold-Chamberlain Airport -- and continued northeast for about 150 miles over the next 16 minutes. The airport's controllers then re-established communication with crew members, who said they had become distracted, the safety board said.

"The crew stated they were in a heated discussion over airline policy and they lost situational awareness," the board said in a news release.