The lives of U.S. service members are being put at risk - and so is the U.S mission in Afghanistan - by lax oversight of private security contractors, according to a Senate Armed Services Committee report based on a year-long investigation of contracting problems.

Two separate issues are in play, according to Sen. Carl Levin, D-Mich., committee chairman: First, some security contractors and subcontractors are using Afghan warlords and strongmen either as employees or recruiters, despite evidence of ties to the Taliban and terrorist organizations. Investigators found examples of security guards using their access to bases to steal weapons and plan attacks against U.S. and coalition forces, and also found that the contracts were funneling U.S. taxpayer money into the hands of people responsible for murder, kidnappings and unrest.

Second, some security guards were simply unqualified, untrained and unreliable. Investigators found guards with no weapons or weapons training who never made patrols, left guard towers unmanned and failed to show up for work.

"You do not need security that produces insecurity," Levin said. "This situation threatens the security of our troops and puts the success of our mission at risk. We need to shut off the spigot of U.S. dollars flowing into the pockets of warlords and powerbrokers who act contrary to our interest and contribute to the corruption that weakens the support of the Afghan people for their government."

Defense Secretary Robert Gates, responding to the Senate committee report, said the Pentagon and U.S. Central Command have been working for three years to tighten contracting rules, placing more emphasis on commanders on the ground weighing in on security contracts.

One month ago, Army Gen. David Petraeus announced new procedures to consider whether giving security contracts to local powerbrokers is a good idea, Gates said. "The memorandum encourages commanders to hire Afghans first and help build Afghan capacity but also emphasizes the need for the command to know those with whom they contract," Gates said in the letter to Levin.

In response to that letter, Levin said he still has some immediate concerns because some current contractors, including some applying for renewals, who are part of the problem uncovered by the committee. "The current situation has huge risks which are unacceptable," he said.

About 26,000 private security contractors are now working in Afghanistan, most of them armed and most of them Afghan nationals. This underscores the importantce of ensuring the security guards are properly vetted, trained and equipped, Levin said.

Many of the problems uncovered in the committee investigation involve problems in 2007 and 2008. But there are recent examples as well, like a Feb. 19 incident in Farah province in northeastern Afghanistan when a Marine patrol came under fire by someone who was later discovered to be a contract security guard. One Marine was killed in the incident, and seven Afghan nationals working as security guards were detained, with their weapons and a cache of opium seized as evidence, according to the report.

Marines interviewed by the committee said this "was not the first time they had taken fire from private security personnel," the report sai
Posted by Steve Douglass at 7:26 AM No comments: 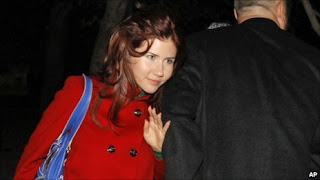 Anna Chapman, a Russian spy recently deported from the US, has made an unexpected public appearance at a cosmodrome in Kazakhstan.

Ms Chapman watched the launch of Russia's Soyuz spacecraft, carrying a US astronaut and two Russian cosmonauts for the International Space Station, from the Baikonur cosmodrome.

She did not make any public comments.

Ms Chapman was among 10 Russians arrested in the US who admitted to being agents for a foreign country.

More serious money-laundering charges against them were dropped.

Moscow agreed to exchange four US spies for the 10 Russian agents and the swap was carried out in Vienna on 9 July.


Ms Chapman refused to answer any questions from the media
It was her first public appearance since she returned to Russia three months ago.

She refused to answer any questions from the media, saying only that she had "just arrived", the Associated Press reports.

She then walked hastily to a guarded guest house near the launch pad accompanied by a burly man who blocked her from reporters, the news agency says.

Reports say she was at the launch as an adviser to a president of one of Russia's banks.

Ms Chapman, who is also known as Anya Kushchenko, has kept a low profile since she was deported from the US.

Her provocative photos from social-networking sites made her a media sensation three months ago.
Posted by Steve Douglass at 7:20 AM No comments: