I am researching something on future airlifters and wanted artwork on the stealthy super-STOL tactical transport Boeing windtunnel tested under the US Air Force Research Laboratory's Speed Agile program. I asked Boeing if they had a releasable image. No, they said. I asked AFRL. No, said they. So there I was passing the time browsing the US Patent and Trademark Office website and what do I find but this:

The patent is here and it's Speed Agile, or close to it based on the one image of a 2008 windtunnel model that I do have, from a presentation by the Boeing program manager at an AIAA conference.

Speed Agile involved low- and high-speed windtunnel tests of a stealthy airlifter concept that could take off in 1,500ft and cruise at Mach 0.8. Usually STOL aircraft aren't that fast. Boeing's design achieves this "speed agility" using a "propulsive wing" - engines embedded in the wing exhaust throught slots at the trailing edge to provide lift as well as thrust. 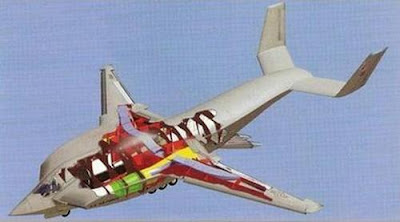 Speed Agile is part of studies into a potential C-130 replacement once called AMC-X, then the Advanced Joint Air Combat System (AJACS), but now morphed into the Air Force/Army Joint Future Heavy Lift. AFRL says Lockheed Martin is now building models of its design for low- and high-speed windtunnel testing. Lockheed has previously shown what could be their Speed Agile concept.

Posted by Steve Douglass at 4:57 AM No comments: