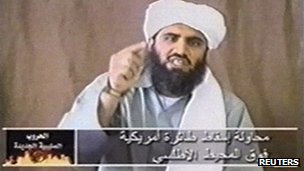 BBC: A man described as a spokesman for Osama Bin Laden has been arrested and will be tried in New York City, the US has confirmed.
Sulaiman Abu Ghaith was captured within the last week in Jordan, Congressman Peter King said on Thursday.
Mr Abu Ghaith is Bin Laden's son-in-law and played a role in plotting the attacks of 9/11, US officials said.
Bin Laden was killed in a May 2011 raid on his hideout in Pakistan by a team of US commandos.
Mr Abu Ghaith is scheduled to appear in a federal court on Friday on charges of conspiracy to kill United States nationals.
"Sulaiman Abu Ghaith held a key position in al-Qaeda, comparable to the consigliere in a mob family or propaganda minister in a totalitarian regime," said FBI Assistant Director-in-Charge George Venizelos in a statement.
"He used his position to threaten the United States and incite its enemies."
'One by one'
A teacher and mosque preacher in Kuwait, Mr Abu Ghaith was stripped of his Kuwaiti citizenship after 9/11.
Justice department officials say Mr Abu Ghaith served alongside Bin Laden from May 2001 to 2002, speaking on behalf of al-Qaeda and warning that attacks similar to 9/11 would continue.
Specifically, on 12 September 2001, he appeared with Bin Laden and Ayman al-Zawahiri to warn the US that a "great army is gathering against you" and called upon "the nation of Islam" to do battle against "the Jews, the Christians and the Americans," according to court records.
He was reportedly smuggled to Iran sometime in 2002.
A Jordanian security official told the Associated Press that Mr Abu Ghaith was handed over last week to US officials under both countries' extradition treaties.
Mr King called the arrest a "very significant victory" in the fight against al-Qaeda.
"One by one, we are getting the top echelons of al-Qaeda," the Republican congressman said. "I give the administration credit for this. It's steady and it's unrelenting and it's very successful."
Mr Abu Ghaith's trial will mark one of the first prosecutions of senior al-Qaeda leaders on US soil.
Since 9/11, 67 foreign terror suspects have been convicted in US federal courts, according to data obtained by the group Human Rights First.

READ MORE AT THE BBC
Posted by Steve Douglass at 9:20 PM No comments:

BBC: North Korea says it is scrapping all non-aggression pacts with South Korea, closing its hotline with Seoul and closing the crossing point between the two countries.
The announcement follows a fresh round of UN sanctions against Pyongyang over its controversial nuclear programme.
The UN resolution was in response to the North's nuclear test last month.
Earlier, Pyongyang vowed to use its right to a pre-emptive nuclear strike against its "aggressors".
The announcement, carried on North Korea's state news agency, says the North is cancelling all non-aggression pacts with the South and closing the main Panmunjom border crossing inside the Demilitarized Zone.
It said it was notifying the South that it was "immediately" cutting off the North-South hotline.
North Korean leader Kim Jong-un is also reported to have visited front-line military units that were involved in the 2010 shelling of a South Korean island.
He is said to have urged the soldiers there to keep themselves ready to "annihilate the enemy" at any time, and reconfirmed so-called "enemy targets" on five islands in the West Sea.
Earlier, the UN Security Council unanimously backed Resolution 2094, imposing the fourth set of sanctions against the North.
The resolution targets North Korean diplomats, cash transfers and access to luxury goods.
It imposes asset freezes and travel bans on three individuals and two firms linked to North Korea's military.
Speaking after the vote, US ambassador to the UN Susan Rice said the document "strongly condemns" Pyongyang's actions.
She said the sanctions would "further constrain" North Korea's ability to develop its nuclear programme.
Ms Rice also warned that the UN would "take further significant actions" if Pyongyang were to carry out another nuclear test.
Posted by Steve Douglass at 5:41 PM No comments: