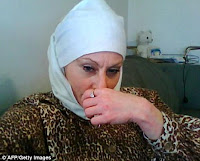 A Pennsylvania woman has been charged with plotting to kill a Swedish man and trying to recruit fighters via the Internet to commit violent attacks overseas, the U.S. Justice Department said on Tuesday.

Colleen LaRose, who also went by the pseudonym of "Fatima LaRose" and "JihadJane," was charged with conspiracy to commit murder overseas, conspiracy to provide support to terrorists, making false statements and attempted identity theft.

LaRose posted a comment on YouTube in June 2008 that she wanted to help "the suffering Muslim people." She sent emails to unnamed co-conspirators offering to become a martyr as well as to use her American background to avoid detection, according to the indictment filed in a federal court in Pennsylvania.

The indictment accused LaRose of agreeing in March 2009 to marry a co-conspirator from a South Asian country and try to obtain residency in Europe. He urged her to go to Sweden, find the unnamed Swedish man "and kill him."

Also on Tuesday, Irish police said seven people had been arrested there in connection with a plot to kill a Swedish cartoonist, Lars Vilk, over a 2007 drawing depicting the Prophet Muhammed with the body of a dog.

The U.S. Justice Department declined to comment on whether the cases were connected.

"Today's indictment, which alleges that a woman from suburban America agreed to carry out murder overseas and to provide material support to terrorists, underscores the evolving nature of the threat we face," David Kris, head of the department's national security division, said in a statement.

The Obama administration has grown increasingly worried about Americans and foreigners living in the United States taking up the cause of anti-American militants and launching attacks here or abroad.

Two recent cases have fueled those concerns: the arrest of a Chicago man accused of helping plot the 2008 Mumbai attacks and an Afghan immigrant living in Colorado who pleaded guilty to plotting a bomb attack on the New York subway system.

In the Pennsylvania case, LaRose was accused of traveling to Europe in August 2009 and tracking online her intended murder target in Sweden, according to the indictment. It also said she tried to raise money over the Internet, lure others to her cause and lied to FBI investigators.

"This case also demonstrates that terrorists are looking for Americans to join them in their cause, and it shatters any lingering thought that we can spot a terrorist based on appearance," Michael Levy, the U.S. attorney in Pennsylvania, said in a statement.

After returning to the United States, LaRose was arrested in October 2009 on a charge related to the theft of a U.S. passport, court documents showed.

If convicted on the four counts in the indictment, which was dated March 4, 2010, LaRose could face a sentence of life in prison and a $1 million fine.

(Editing by Chris Wilson)
Posted by Steve Douglass at 9:38 AM No comments: