At NASA's Kennedy Space Center in Florida, technicians plan to install reference dots on space shuttle Discovery's ground umbilical carrier plate, or GUCP, to monitor for movement during tanking. The work was expected to be completed yesterday, but was delayed by rain.

The shuttle's crew is practicing on-orbit tasks today in the motion base simulator at the astronauts' training base at NASA's Johnson Space Center in Houston.

Discovery's launch is currently targeted for no earlier than Dec. 17, after shuttle managers determined more tests and analysis are needed.

The Program Requirements Control Board reviewed on Nov. 23 repairs and engineering evaluations associated with cracks on two 21-foot-long, U-shaped aluminum brackets, called stringers, on the shuttle's external tank. Managers decided the analysis and tests required to launch Discovery safely are not complete. The work will continue through this week.

The next status review by the PRCB will be Thursday, Dec. 2. If managers clear Discovery for launch on Dec. 17, the preferred time is about 8:51 p.m. EST.
Posted by Steve Douglass at 9:59 AM No comments:

Washington (CNN) -- After posting thousands of secret government documents, WikiLeaks came under an electronic attack designed to make it unavailable to users, the whistle-blower website said Tuesday.
The site also experienced a distributed denial of service (DDOS) attack on Sunday, just as it was publishing the first of what it says are 250,000 secret U.S. diplomatic cables. Such attacks normally are done by flooding a website with requests for data.

"DDOS attack now exceeding 10 Gigabits a second," WikiLeaks said on Twitter.
The effects of Tuesday's electronic disruption were unclear.
WikiLeaks recovered from Sunday's disruption and began publishing cables from U.S. embassies around the world, documents that the website said represented the largest-ever disclosure of confidential information. Those documents give the world "an unprecedented insight into the U.S. government's foreign activities," the site said.

WikiLeaks drew widespread condemnation for publishing the confidential cables that in some instances, detailed with unusual frankness Washington's diplomatic interactions with other countries.
Posted by Steve Douglass at 9:12 AM No comments: 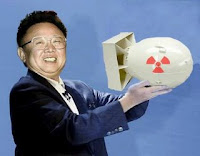 CNN: The New York Times suggest Chinese officials are losing patience with long-time ally North Korea. Senior figures in Beijing have even described the regime in the North as behaving like a "spoiled child."

According to cables obtained by WikiLeaks, South Korea's then vice foreign minister, Chun Yung-woo, said earlier this year that senior Chinese officials (whose names are redacted in the cables) had told him they believed Korea should be reunified under Seoul's control, and that this view was gaining ground with the leadership in Beijing.

Chun was quoted at length in a cable sent by the U.S. ambassador in Seoul, Kathleen Stephens, earlier this year. He is reported as saying that "the North had already collapsed economically and would collapse politically two to three years after the death of (leader) Kim Jong-il."

He said that younger generation Chinese Communist party leaders no longer regarded North Korea as a useful or reliable ally and would not risk renewed armed conflict on the peninsula, according to a secret cable to Washington.

The cables suggest China is frustrated in its relationship with Pyongyang. One from April 2009 quoted Chinese Vice Foreign Minister He Yafei as saying that "North Korea wanted to engage directly with the United States and was therefore acting like a "spoiled child" in order to get the attention of the "adult." The cable continued: "China therefore encouraged the United States, 'after some time,' to start to re-engage the DPRK."

In October 2009, a cable sent from Beijing recounted a meeting between U.S. diplomats and Chinese State Councillor Dai Bingguo, who had recently met Kim Jong Il. According to the leaked cable, Dai noted that Kim had lost weight when compared to when he last saw him three years earlier, but that

Kim appeared to be in reasonably good health and still had a "sharp mind."
Dai also spoke about Kim's liking for alcohol. The cable continued: "Kim Jong-il had a reputation among the Chinese for being 'quite a good drinker,' and, Dai said, he had asked Kim if he still drank alcohol. Kim said yes."

(CNN) -- North Korea warned Tuesday that the continuing military drills by the United States and South Korea could lead to "all-out war any time."

The firmly-worded message was published in North Korea's state-run KCNA news service.
"If the U.S. and the South Korean war-like forces fire even a shell into the inviolable land and territorial waters of the DPRK, they will have to pay dearly for this," the news service report said.
South Korea and the United States launched joint anti-submarine military exercises on Monday, drawing consternation from North Korea.

Seoul and Washington postponed the exercises earlier this month because of a tropical storm. The drills, which are to run through Friday, are "designed to send a clear message of deterrence to North Korea," U.S. Forces Korea have said.
U.S. officials have said the exercises off the western coast of the Korean peninsula are in response to North Korea's sinking of a South Korean warship in March.
Posted by Steve Douglass at 5:08 AM No comments: