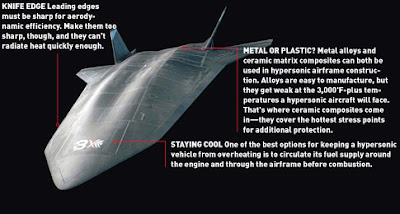 Editors note: According to an article in Aviation Week & Space Technology Magazine, DARPA'S hypersonic aircraft study, Blackswift has been cancelled. My guess it has not been cancelled but has retreated into the black world because the technology behind the aircraft platform is as revolutionary as Low Observable (stealth) technology and thus now labeled as highly-classified. Coming soon to a non-existent test base in Nevada - Blackswift - redux.

Blackswift was to demonstrate an unmanned hypersonic vehicle able to take off, accelerate to a Mach 6 cruise and return to a runway landing.

“Congress made significant reductions in the amount of funds available to DARPA and the Air Force for the Blackswift testbed,” the agency said in a statement. “Based on this, DARPA determined that it would not be possible to proceed with the solicitation for the effort.”

DARPA had hoped to award a contract for the demonstrator later this year, and was believed to be negotiating with a Lockheed Martin Skunk Works-led team that included Boeing. The Blackswift was expected to fly in 2012. Meanwhile, DARPA says it will continue with the Falcon program to fly unpowered hypersonic test vehicles in 2009.

Congress was skeptical of Blackswift’s technical achievability and operational utility, cutting DARPA FY ‘09 funding from the requested $70 million to $10 million and eliminating the Air Force’s requested $50 million for the joint program.

“Obviously we are disappointed that we will not have the appropriated funds to move forward with the Blackswift flight test,” DARPA program manager Steven Walker said. He said a significant effort had been made to develop the propulsion technology and build a national government and industry team capable of developing and flying a reusable hypersonic testbed.

“The Blackswift testbed would have been able to take off under its own power, cruise at Mach 6, maneuver at hypersonic speeds and land, and then do it again,” Walker said. “Blackswift, or something very much like it, will be a required step prior to the U.S. developing an operational, reusable air-breathing hypersonic airplane.”

Blackswift was to be powered by turbine-based combined-cycle engines using a high-Mach turbojet to take the vehicle from standstill to the speed at which a dual-mode ramjet/scramjet took over and accelerated it to Mach 6. The turbojet and scramjet engines were to share inlets and nozzles.

Under DARPA’s Falcon program, Lockheed Martin is building two unpowered HTV-2 test vehicles, which will be launched by Orbital Sciences Minotaur boosters to demonstrate aerodynamic and structural technology for sustained hypersonic flight.
Posted by Steve Douglass at 7:22 PM No comments: