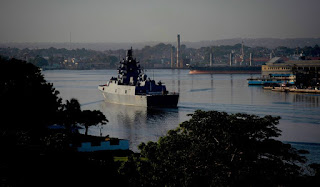 HAVANA — One of the Russian navy’s most advanced warships entered Havana’s harbor Monday and docked at the port used until this month by U.S. cruise lines.

The Admiral Gorshkov entered service last year. It is one of the Russian navy’s most advanced warships and is armed with cruise missiles, air defense systems and other weapons. The frigate is based at the Arctic port of Severomorsk and is part of Russia’s Northern Fleet. It’s the first ship in a new class of frigates intended to replace aging Soviet-era destroyers to project power far away from Russian shores. It is accompanied by the multifunctional logistics vessel Elbrus, the medium sea tanker Kama and the rescue tug Nikolai Chiker, the Russian navy says.

The navy says the Admiral Gorshkov crossed through the Panama Canal into the Caribbean Sea on or around June 18. The naval group has covered a distance of over 28,000 nautical miles since leaving Severomorsk in February, with stops in China, Djibouti, Sri Lanka and Colombia, the navy says. It says the ships are scheduled to make calls at several Caribbean ports, without specifying which. The naval group was greeted with a 21-gun salute from Cuban forces stationed at the entrance to the Bay of Havana. The Gorshkov responded with its own salute.

Russia has not provided details about the purpose of its trip, but the Kremlin has moved to bolster Russia’s military capability amid tensions with the West following the annexation of Crimea in 2014. The Russian armed forces have received hundreds of new warplanes and dozens of warships in recent years as part of a sweeping military modernization program that allowed Moscow to project power abroad.

As the U.S.-Russian relations have sunk to the lowest levels since the Cold War, Moscow has been considering further steps to boost its global presence. An air base and a naval facility in Syria are currently Russia’s only military outposts outside the former Soviet Union but Russian military officials have talked repeatedly about plans to negotiate deals for Russian warships and aircraft to use foreign ports and air bases.

Russian ships have become an occasional presence in Havana over the last decade. In 2008, after a visit by then Russian President Dmitry Medvedev, a group of Russian ships entered Cuban waters in what Cuban media described as the first such visit since 1991. Another group visited the southern city Cienfuegos in 2010, reportedly with a cargo of wheat. Others visited in 2013 and in 2014.

In January 2015, the reconnaissance and communications ship Viktor Leonov arrived unannounced in Havana a day before the start of discussions between U.S. and Cuban officials on the reopening of diplomatic relations. The Viktor Leonov returned again in March 2018.

All of the Russian naval missions to Cuba have been seen as a projection of military power close to U.S. shores, although neither Cuba nor Russian have described them as anything other than routine.

Early during his presidency, Russian leader Vladimir Putin ordered the military to shut a Soviet-era electronic surveillance outpost in Cuba and a naval base in Vietnam as he sought to warm ties with the United States. Amid tensions with the U.S., Russian military officials talked about the possibility of reinstating a presence on Cuba and in Vietnam.

Russian warships and aircraft have periodically made forays into the Caribbean. In a show of power, a pair of Russian nuclear-capable Tu-160 strategic bombers visited Venezuela in December in what the Russian military described as a training mission. The deployment came before the latest crisis in Venezuela. Russia also sent Tu-160s and a missile cruiser to visit Venezuela in 2008 amid tensions with the U.S. after Russia’s brief war with Georgia. A pair of Tu-160s also visited Venezuela in 2013.

It is not publicly known if the Admiral Gorshkov will visit Venezuela.

Russians were once the most important group of foreigners in Cuba, with many thousands of Soviet workers and advisers collaborating on projects in fields ranging from agricultural production to military defense. That ended with the fall of the Soviet Union, which saw the end of the Soviet and Russian presence and the start of a grueling depression in Cuba known as the “Special Period.” That period ended with the start of Venezuelan aid around 2000.

Cuba also somewhat diversified its economy by attracting Latin American, European and Asian investment, and tourism primarily from Canada, Europe and the U.S. U.S. tourism surged in 2015 and 2016 as the Obama administration loosed restrictions on travel to Cuba as part of the opening with the communist government. That opening included allowing cruise ships. But the Trump administration has been trying to cut off income to Cuba and reduce the number of travelers to the island. The latest blow was ending cruise ship travel to the island, a measure that went into effect this month.

In what some Cubans saw as a potent symbol of changing times, the Admiral Gorshkov is moored at the cruise terminal where ships from cruise lines like Carnival and Norwegian loomed over Old Havana as recently as June 6.


Posted by Steve Douglass at 3:15 PM No comments: 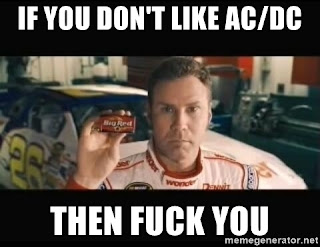 Between 2009 and 2010, Iran's nuclear program was the target of a devastating cyber attack. A virus, reportedly developed by the American and Israeli governments and known as Stuxnet, took control of centrifuge controls in facilities across the country, causing thousands of machines to break. But apparently the attackers weren't content with just crippling the country's nuclear efforts — they wanted to show their control in another way. To do that, they reportedly hijacked the facilities' workstations and used them to play AC/DC.

And they played it loud. Speaking at the Black Hat security conference, Finnish computer security expert Mikko Hypponen recalled an email he received from an Iranian scientist at the time of the Stuxnet attacks. VentureBeat quotes from the correspondence.


"There was also some music playing randomly on several of the workstations during the middle of the night with the volume maxed out. I believe it was the American band AC-DC Thunderstruck. It was all very strange and happened very quickly. The attackers also managed to gain root access to the machine they entered from and removed all the logs."

Of course, "Thunderstruck" is a song from 1990 album Razor's Edge, not a suffix to the Australian band's name, but the scientist can be forgiven for getting it wrong. Under the country's censorship laws, only Iranian folk, classical, or pop music are acceptable. Since the Stuxnet attack, President Obama has reportedly warned against using cyber weapons to target other countries, for fear their source code could be repurposed and turned back on the United States. As yet, the president hasn't commented on the dangers of deploying AC/DC.
Posted by Steve Douglass at 8:17 AM No comments: