Washington (CNN) -- In the Rolling Stone article that got him fired, Gen. Stanley McChrystal says of the aides who surround him "I'd die for them. And they'd die for me." But the military men around McChrystal are now silent.

Not one of those anonymously quoted has come forward, according to a source close to the general. No one has acknowledged they told Rolling Stone McChrystal thought President Barack Obama looked "uncomfortable and intimidated" in his first meeting with military brass or that the general was personally "disappointed" after a meeting with the commander-in-chief.

It's no surprise he never claimed he was misquoted, several military sources who personally know McChrystal told CNN. They say, despite his fatal mistake in judgment, it is in his character to take sole responsibility for the inappropriate statements and command atmosphere.

The general has remained silent except for a statement of apology and a brief statement announcing his resignation.

But days after his ouster, one military official who worked for McChrystal in Afghanistan has told CNN that many of the controversial quotes in the article were never meant to be used on-the-record. But at no point did the official dispute the accuracy of comments about the president or other key administration officials that appeared in the article.

"Many of the sessions were off-the-record and intended to give him (writer Michael Hastings) a sense of how we operated as a team," wrote the International Security Assistance Force official who communicated with CNN on the condition no name was used.

Since the beginning, Rolling Stone magazine has insisted it abided by the understanding between the publication and military about what Hastings could use in his reporting.

"Everything we published was on the record," Rolling Stone Executive Editor Eric Bates said to CNN on Tuesday. "We were very clear about the boundaries, for attribution or off the record."

Bates maintained that position when told of the objections by the military official.

"In every instance we abided by the ground rules," Bates told CNN Friday in a telephone interview.

The military official said that the magazine confirmed facts in the article but suggested they did not check any of the controversial elements.

"They asked us to check the facts of series of issues. In total, they don't come close to revealing what ended up in the final article," the official said.

Bates said there was no need to check the quotes because Hastings had either tape recordings or extensive notes on material such as specific quotes.

A spokesman for the magazine e-mailed CNN later Friday to reiterate the point.

"We never fact check quotes given to us from our interview subjects, as is common practice," wrote Mark Neschis, a spokesman for Rolling Stone's publisher, in an e-mail to CNN. "Our reporters obviously either recorded the comment, or wrote it down, so it's not necessary."

Rolling Stone also says it never sent the whole article to the military for fact checking but rather sent a number of questions to Duncan Boothby, the press aide who resigned in the wake of the controversy, to make sure of the accuracy of the story.

The military official provided a copy of the exchange between Rolling Stone's fact checker and Boothby in which the fact checker poses about 30 questions. The official provided the e-mail to demonstrate McChrystal and his staff did not know the article was going to cause such a firestorm and to show that perhaps, in the military's view some, ground rules were violated.

For example, the fact checker asks if McChrystal voted for Obama, saying that information came directly from the general.

Boothby replies in all capitals, " IMPORTANT -- PLEASE DO NOT INCLUDE THIS -- THIS IS PERSONAL AND PRIVATE INFORMATION AND UNRELATED TO HIS JOB. IT WOULD BE INAPPROPRIATE TO SHARE. MY REASON FOR THIS IS IT WOULD PRESENT AN UNDUE COMMAND INFLUENCE ON JUNIOR OFFICERS OR SOLDIERS WHO SHOULD MAKE THEIR OWN POLITICAL DECISIONS. THERE ARE VERY STRICT RULES IN THE MILITARY ON SEPARATING CHURCH AND STATE ON THIS SORT OF STUFF -- HAVE TO KEEP OUT OF POLITICAL PREFERENCE AND PERSONAL CHOICE."

In the Rolling Stone article, Hastings reported that the general "had voted for Obama." Despite Boothby's insistence that the information should not be included in the article, it does not appear he was contesting that it was said on the record.

Allowing statements to be declared off-the-record after the fact is not accepted journalistic practice.

Most of the questions focused on confirming specific details about McChrystal, such as the number of times the general traveled around the country with Afghan President Hamid Karzai. Other questions tried to confirm information that could only be learned from McChrystal's spokesman, such as some of the private jokes between the general and his staff that were in the article.

"Does Gen. McChrystal carry a custom-made set of nunchuks in his convoy that are engraved with his name and four stars?" the Rolling Stone fact checker asks.

"HE DOESN'T CARRY THEM. HIS PROTECTION DETAIL MADE THEM FOR HIM AS A JOKE AS WELL AS A SPECIAL HOLDER IN THE CONSUL OF HIS VEHICLE," Boothby answered, again in all capital letters. "IT CAME FROM ONE DAY M4 [a military shorthand for McChrystal's rank] WAS TESTING HIS PERSONAL STAFF TO MAKE SURE THEY HAD EVERYTHING BEFORE WE LEFT FOR A MEETING. 'MY GLASSES?' 'CHECK SIR' 'MY BRIEFING BOOK?' 'CHECK SIR' 'NUNCHUCKS' (HE WAS JOKING TO SHOW HIS STAFF THAT THEY HADN'T THOUGHT OF EVERYTHING, SO THEY WENT OUT AND HAD A SET MADE FOR HIM."
Posted by Steve Douglass at 9:10 PM No comments:

It's a drag to be a Taliban commander. 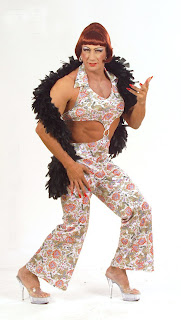 ISAF said intelligence sources tracked Sakhi to a compound near the village of Qal-eh Saber in Pul-e 'Alam district.

After Afghan troops called for women and children to leave a building, Sakhi came out with the group, disguised in women's attire.

ISAF said he pulled out a pistol and a grenade and fired at troops. Afghan and coalition forces shot him and he dropped the grenade, which detonated and wounded a woman and two children.

Authorities say Sakhi was involved in improvised explosive device attacks, ambushes and indirect fire attacks. He also kidnapped and killed a National Directorate of Security chief in Logar province.
In other Afghan fighting, several insurgents in Zabul province were killed in a "precision airstrike" on Friday night and bomb attacks in southern Afghanistan killed three NATO-led service member on Saturday.
Posted by Steve Douglass at 7:33 AM No comments: