I recorded this brief communications intercept last night on 311.000 MHZ (STRATCOM PRIMARY) around 4:00AM last night. I don't know what to think of it. Maybe the pilots out there can tell me what it means?

Download the audio file HERE.
Posted by Steve Douglass at 6:15 PM No comments: 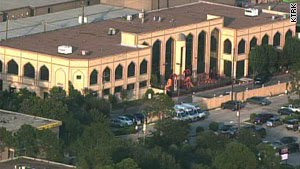 The U.S. government seeks forfeiture of at least three mosques, including this one in Houston, Texas

New York (CNN) -- The federal government said Thursday it is seeking forfeiture of properties belonging to the Alavi Foundation and Assa Corp. -- accused of transferring money to a bank owned by the Iranian government -- including a Manhattan skyscraper and at least three mosques.
Preet Bharara, the U.S. attorney for the Southern District of New York, announced

Thursday's filing of an amended civil complaint seeking forfeiture of the Alavi Foundation's interest in the 36-story office tower located on Fifth Avenue in Midtown Manhattan.

It alleges that the properties were "involved in and [were] the proceeds of money laundering offenses," and that the owners violated the International Emergency Economic Powers Act, executive orders and U.S. Department of Treasury regulations.


READ THE FULL STORY AT CNN
Posted by Steve Douglass at 4:52 PM No comments:

DENVER (Reuters) - The parents of a Colorado boy thought to have floated away in a homemade helium balloon will plead guilty to criminal charges of staging the incident in a publicity-seeking hoax, their lawyer said on Thursday.

Richard and Mayumi Heene agreed to the plea deal under threat that prosecutors would seek to deport the boy's mother, a Japanese citizen, if she were convicted of more serious charges in the case, defense attorney David Lane said.

Mayumi Heene will plead guilty on Friday to a misdemeanor charge of false reporting to authorities, while her husband will enter a guilty plea to a felony charge of attempting to influence a public servant, Lane said in a statement.

The Heenes drew worldwide attention on October 15 when they reported that their 6-year-old son, Falcon, had accidentally sailed away in a silver, saucer-shaped helium balloon.

The odd-looking airship drifted over Colorado for 50 miles, trailed by National Guard helicopters as authorities mounted a search operation that riveted television viewers.

The balloon later landed empty near Denver International Airport and the boy turned up safe in the family attic. Public sympathy turned to outrage when the Heenes' account of the incident began to unravel.

A criminal investigation was launched and court documents revealed the mother admitted the incident was a publicity stunt aimed at making the family marketable for a reality TV show.
Posted by Steve Douglass at 12:59 PM No comments:

Obama set to visit troops at Elmendorf: "ANCHORAGE, Alaska — President Barack Obama was scheduled to address Alaska troops Thursday in his first — and very short — visit to the state.Obama planned to arrive at Elmendorf Air Force Base shortly before 1 p.m. for a refueling stop before he heads to Tokyo to launch his first Asia trip.His speech to troops and invited politicians is closed to the public. That didnt kept people from inundating the Alaska Democratic Party office Wednesday.'Our phones have been ringing constantly, people wanting to know how they could get in,' spokesman Kevin Harun said.Harun said that because the visit is private, his office is not planning any events to coincide with the visit from the Democratic president.The Republican Party of Alaska also has no events planned, according to chairman Randy Ruedrich.

He said earlier this week that staging a political event would be inappropriate in light of the deadly shootings at Fort Hood, Texas, last week.Sen. Mark Begich, D-Alaska, is among those attending the event at Elmendorf. The two other members of Alaskas congressional delegation — Republicans Sen. Lisa Murkowski and Rep. Don Young — dont plan to go.Neither does Republican Gov. Sean Parnell. Spokeswoman Sharon Leighow said he has a speaking engagement that was booked a month ago, but added a representative from his office would attend.In the general election last year, Obama lost the traditionally red state to Republican John McCain and running mate Sarah Palin, then Alaskas governor. Obama received almost 38 percent, while McCain garnered over 59 percent of the more than 326,000 votes cast.More than 126,000 Alaska voters are registered as Republicans, followed by more than 77,000 as nonpartisan. Among the states total of 485,098 voters, nearly 75,400 are registered as Democrats.Palin spokeswoman Meghan Stapleton said the former governor was in Chicago taping an interview with Oprah Winfrey and wouldnt be at Elmendorf."

Posted by Steve Douglass at 7:53 AM No comments:

WWII-era plane makes emergency landing: "BELLINGHAM, Wash. — A fighter plane from the World War II-era flying over Whatcom County for Veterans Day safely made an emergency landing at Bellingham International Airport after smoke filled the cockpit.The P-51 Mustang was doing flyover as part of an event at the Heritage Flight Museum and was preparing to land when a resistor in the cockpit overheated, says Greg Anders, the pilot and the museums executive director.Anders tells The Bellingham Herald that smoke started coming from the resistor cover so he shut down the electrical system and made the emergency landing. Aside from the burned cover, the plane had no damage.Anders says the plane will remain grounded until its determined what caused the resistor to overheat."

Posted by Steve Douglass at 7:52 AM No comments: