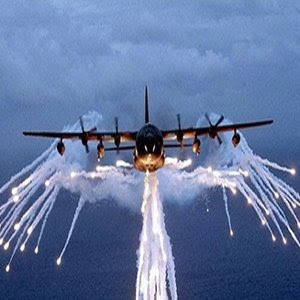 6/18/2009 - CANNON AIR FORCE BASE, N.M. -- People living in the communities surrounding Cannon may notice some differences in night-flying operations since two AC-130H Spectre gunships arrived permanently for duty May 19.

According to 16th Special Operations Squadron Commander Lt. Col. Sean Farrell, the nature of the gunship mission calls for much of the training to be conducted in urban areas.

"When we deploy, we will often be flying over cities and tracking targets within those cities under the cover of night," he said. "So when we train at Cannon, it is imperative that some of our operations be done over cities at night as well."

Local residents may notice the low rumbling of gunships flying in circles overhead as aircrew perform training, flying at an altitude in which the oxygen is sufficient because the aircraft is not pressurized.

"Much of what we'll be doing is adjusting our sensors as we practice acquiring targets," said Colonel Farrell. "That will require us to fly in circles around the target. The communities we're flying over will hear us, but we will do our best to fly at altitudes that will limit the amount of noise. We want to be good neighbors, too."

Current Cannon Airfield operating hours are 10 a.m. to 2 a.m. Monday through Thursday, and 10 a.m. to 6 p.m. Friday and Saturday. The AC-130H Spectre generally flies at night.

For more information about the AC-130H Spectre gunship and its mission, look at the fact sheet on www.cannon.af.mil or call the Cannon Public Affairs office at (575) 784-4131.
Posted by Steve Douglass at 10:16 AM No comments:

Posted by Steve Douglass at 10:12 AM No comments:

Continental Airlines en route from Belgium landed safely in Newark, N.J., today after the pilot died midflight at the controls of a jet with 247 passengers onboard.


The Federal Aviation Administration says a plane carrying a pilot who died in mid-flight has landed safely at the airport in Newark, N.J.
(ABC News)
More Photos
The crew onbord the Boeing 777 included two trained pilots who took control of the plane and landed it at the airport just outside New York City. There were also federal air marshals onboard Continental Flight 61.

The 61-year-old pilot apparently died of natural causes, Continental said in a statement, and the passengers were not immediately told of his death, according to the airline.

"The crew on this flight included an additional relief pilot who took the place of the deceased pilot. The flight continued safely with two pilots at the controls," according to Continental's statement.
Posted by Steve Douglass at 10:06 AM No comments: