(CNN) — Iran test-fired a rocket that it plans to launch later to carry a research satellite into space, state-run media reported Sunday.

The launch of Iran’s two-stage rocket, called Safir or “messenger,” was successful on Saturday and “paved the way for placing the first Iranian satellite in orbit,” the official Islamic Republic News Agency reported.

The test launch comes amid back and forth between Iran and Western powers on the country’s controversial nuclear program, and concerned senior U.S. officials, who said Iran could use the rocket to deliver warheads.

“The Iranian development and testing of rockets is troubling and raises further questions about their intentions,” said National Security Council spokesman Gordon Johndroe.
Posted by Steve Douglass at 3:19 PM No comments:

Posted by Steve Douglass at 3:13 PM No comments: 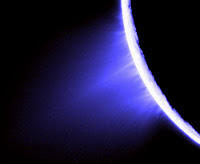 Exquisite close-ups of fissures on a tiny ice-ball moon of Saturn will provide the latest clues in solving how a 310-mile-wide ice ball could possibly be shooting geysers of vapor and icy particles.


Since the discovery of the jets in 2006, the moon, Enceladus, has jumped near the top of the list of potential places for life in the solar system. A warm spot near Enceladus’ south pole powers the jets and may also melt below-surface ice into liquid water, a necessity for living organisms.

On Monday, NASA’s Cassini spacecraft made its latest flyby of Enceladus (pronounced en-SELL-ah-dus), passing 30 miles above the surface at a speed of 64,000 miles per hour.

The new images, at seven meters per pixel, offer a resolution 10 times as great as earlier views. Scientists can now see the V-shaped walls of the fractures that are nearly 1,000 feet deep.

“This is the mother lode for us,” Carolyn Porco, leader of Cassini’s imaging team, said in a news release. “A place that may ultimately reveal just exactly what kind of environment — habitable or not — we have within this tortured little moon.”

The observations should help scientists understand how geological processes can persist on such a small body, which is being heated by tidal distortions induced by Saturn.

A series of long “tiger stripes” scar Enceladus’ solar polar region, and earlier observations had allowed the Cassini scientists to triangulate the origin of the jets within the tiger stripes and show that the warm spots also coincide with the tiger stripes. In its last flyby in March, Cassini flew through the plume and detected organic molecules, the carbon-based molecules that could provide the building blocks for life. Cassini also detected water vapor, carbon dioxide and carbon monoxide. The composition was surprisingly similar to that of a comet, scientists said.

In the fall, Cassini is to make an even closer near-miss of Enceladus, passing through the geyser within 15 miles of the moon’s surface.
Posted by Steve Douglass at 6:09 AM No comments:

Why You Shouldn't Trust UFO Videos ...

Posted by Steve Douglass at 5:45 AM No comments: