WASHINGTON (AP) — In a stunning setback for a nuclear missile force already beset by missteps and leadership lapses, the Air Force disclosed on Wednesday that 34 officers entrusted with the world's deadliest weapons have been removed from launch duty for allegedly cheating — or tolerating cheating by others — on routine proficiency tests.

The cheating scandal is the latest in a series of Air Force nuclear stumbles documented in recent months by The Associated Press, including deliberate violations of safety rules, failures of inspections, breakdowns in training, and evidence that the men and women who operate the missiles from underground command posts are suffering burnout. In October the commander of the nuclear missile force was fired for engaging in embarrassing behavior, including drunkenness, while leading a U.S. delegation to a nuclear exercise in Russia.

A "profoundly disappointed" Air Force Secretary Deborah Lee James, the service's top civilian official, told a hurriedly arranged Pentagon news conference that the alleged cheating at Malmstrom Air Force Base, Mont., was discovered during a previously announced probe of drug possession by 11 officers at several Air Force bases, including two who also are in the nuclear force and suspected of participating in the cheating ring.

"This is absolutely unacceptable behavior," James said of the cheating, which Gen. Mark Welsh, the Air Force chief of staff, said could be the biggest such scandal in the history of the missile force.
Posted by Steve Douglass at 3:44 PM No comments: 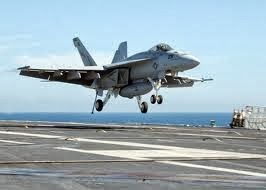 Commander Mike Kafka with Naval Air Atlantic said the jet is part of VFA-143, assigned to Carrier Air Wing 7, and is currently assigned to USS Eisenhower. The flight originated from Oceana Naval Air Station and was conducting routine training exercises when the jet crashed at approximately 2:30 p.m.

Spokesman Petty Officer David Weydert confirmed the pilot ejected and was rescued by a fishing vessel in the area. The pilot was conscious when he was picked up. A Navy MH-60 Sea Hawk responded to the scene and transported the pilot to Sentara Norfolk General Hospital, where he is currently listed in critical condition, according to Commander Mike Kafka.

WAVY News 10's Lauren Compton observed a person being taken off a Navy helicopter at the hospital around 4 p.m. She reports the person was lying flat on a stretcher, covered with a blanket.
Posted by Steve Douglass at 3:39 PM No comments: