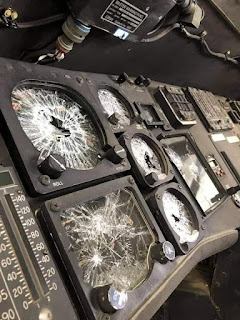 BAGRAM, Afghanistan (AP) — The twisted remains of several all-terrain vehicles leaned precariously inside Baba Mir’s sprawling scrap yard, alongside smashed shards that were once generators, tank tracks that have been dismantled into chunks of metal, and mountains of tents reduced to sliced up fabric.

It’s all U.S. military equipment. The Americans dismantled  their portion of nearby Bagram Air Base, their largest  outpost in Afghanistan, and anything that is not being taken home or given to the Afghan military is being destroyed as completely as possible, even small outposts were dismantled or reduced to rubble.

They do so as a security measure, to ensure equipment doesn’t fall into the hands of militants. But Mir and the dozens of other scrap sellers around Bagram see it as an infuriating waste.

As the last few thousand U.S. and NATO troops head out the door, ending their own 20-year war in Afghanistan, they are involved in a massive logistical undertaking, packing up bases around the country. They leave behind a population where many are frustrated and angry. The Afghans feel abandoned to a legacy they blame at least in part on the Americans — a deeply corrupt U.S.-backed government and growing instability that could burst into brutal new phase of civil war.

The bitterness of the scrapyard owners is only a small part of that, and it’s based somewhat on self-interest: They feel they they could have profited more from selling intact equipment.

It’s been a common theme for the past two traumatic and destructive decades in which actions that the U.S. touted as necessary or beneficial only disillusioned Afghans who felt the repercussions.

At Bagram, northwest of the capital of Kabul, and other bases, U.S. forces are taking stock of equipment to be returned to America. Tens of thousands of metal containers, about 20 feet long, are being shipped out on C-17 cargo planes or by road through Pakistan and Central Asia. As of last week, 60 C-17s packed with equipment already had left Afghanistan.

Officials are being secretive about what stays and what goes. Most of what is being shipped home is sensitive equipment never intended to be left behind, according to U.S. and Western officials who spoke on condition of anonymity in order to talk freely about departing troops.

Other equipment, including helicopters, military vehicles, weapons and ammunition, will be handed over to Afghanistan’s National Defense and Security Forces. Some bases will be given to them as well. One of those most recently handed over was the New Antonik base in Helmand province, where Taliban are said to control roughly 80% of the rural area.


Destined for the scrap heap are equipment and vehicles that can neither be repaired nor transferred to Afghanistan’s security forces because of poor condition. 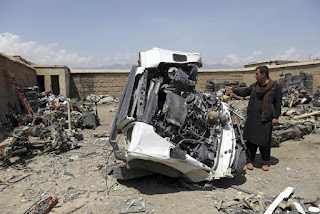 So far about 1,300 pieces of equipment have been destroyed, said a U.S. military statement. There will be more before the final deadline for departure on Sept. 11, said one U.S. official, speaking on condition of anonymity because he was not authorized to talk to the media.

The practice is not new. The same was done in 2014, when thousands of troops withdrew as the U.S. and NATO handed Afghanistan’s security over to Afghans. More than 387 million pounds (176 million kilograms) of scrap from destroyed equipment and vehicles was sold to Afghans for $46.5 million, a spokeswoman for the military’s Defense Logistics Agency in Virginia said at the time.

Last month, around the time President Joe Biden announced that America was ending its “forever war,” Mir paid nearly $40,000 for a container packed with 70 tons of trashed equipment.

He’ll make money, he told The Associated Press, but it will be a fraction of what he could have made if they’d been left intact, even if they weren’t in working condition.

The vehicle parts would have been sold to the legions of auto repair shops across Afghanistan, he said. That can’t happen now. They’ve been reduced to mangled pieces of metal that Mir sells for a few thousand Afghanis. 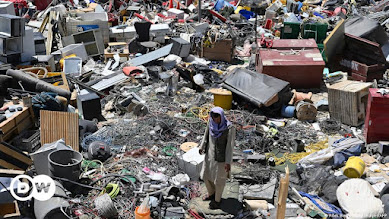 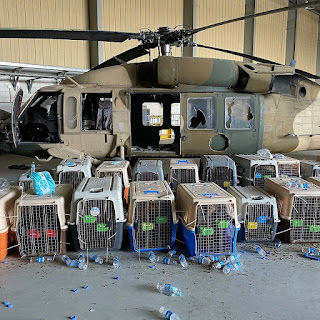 Sadat, another junk dealer in Bagram who gave only one name, says other scrap yards around the country are crammed with ruined U.S. equipment.

“They left us nothing,” he said. “They don’t trust us. They have destroyed our country. They are giving us only destruction.”

The Western official familiar with the packing up process said U.S. forces face a dilemma: Hand off largely defunct but intact equipment and risk having it fall into hands of enemy forces, or trash them and anger Afghans.

To make his point, he recounted a story: Not so long ago, U.S. forces discovered two Humvees that had found their way into enemy hands. They had been refitted and packed with explosives. U.S. troops destroyed the vehicles, and the incident reinforced a policy of trashing equipment.

But Afghan scrap yard owners and dozens of others who sifted through the junk in the yards wondered what dangers could have been posed by a treadmill that was torn apart, the long lengths of fire hose that were cut to pieces, or the bags once used to create large sand-barrier walls with their powerful mesh fabric now sliced and useless.

Dozens of tents cut and sliced sat in piles on the floor. Nearby were fuel bags and gutted generators, tank tracks and gnarled metal that looked like the undercarriage of a vehicle.

“They destroyed our country and now they are giving us their garbage,” said gray-bearded Hajji Gul, another junk dealer. “What are we to do with this?”

"Troops likely used thermate grenades, which burn at temperatures of 4,000 degrees Fahrenheit, to destroy key components of the equipment," USA Today reports, citing a Pentagon official, while "some pieces of equipment were likely blown up" at the airport. "McKenzie stressed that the equipment would be of no use in combat," USA Today notes, "but they will likely be display by the Taliban as trophies of their decades-long fight to retake their country."

"The U.S. military removed planes, heavy weapons, and sophisticated military equipment as it began winding down its operations in Afghanistan in the spring," NPR reports. "But it couldn't take home 20 years of accumulated hardware and instead left much of it to the Afghan military" — and after the Afghan military collapsed over the summer, "the Taliban wasted no time in gloating over their new war booty," including billions of dollars in captured "aircraft, trucks, Humvees, artillery guns, and night-vision goggles."

The U.S.-supplied "rifles, plate carrier vests, and other infantry gear provide legitimate tactical value to the group's foot soldiers," The Washington Post reports, but "some of the captured equipment, like helicopters and attack planes, may be more useful for propaganda imagery than for everyday use." U.S. contractors maintained the Black Hawk helicopters, C-130 transport planes, and other aircraft that require expensive and hard-to-find parts, and the Taliban lacks the technical expertise to keep them airborne, even if they find pilots. 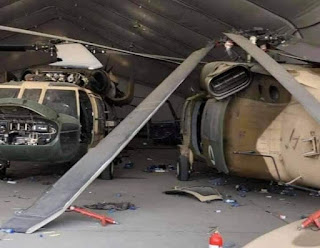 The Taliban were "significantly helpful" in enabling the U.S. and allied forces to airlift 122,000 people out of Kabul's airport in two weeks, McKenzie said, but they will have a hard time securing Kabul. When the Taliban swept through Afghanistan, freeing its fighters from prisons, it also swelled the ranks of ISIS-K to about 2,000 militants, he said. "Now they are going to be able to reap what they sowed." 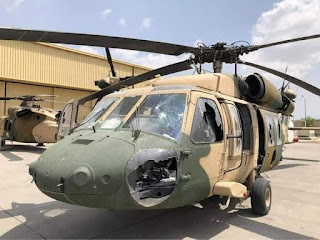 A controlled detonation by American forces that was heard throughout Kabul has destroyed Eagle Base, the final C.I.A. outpost outside the Kabul airport, U.S. officials said on Friday.

Blowing up the base was intended to ensure that any equipment or information left behind would not fall into the hands of the Taliban.

Eagle Base, first started early in the war at a former brick factory, had been used throughout the conflict. It grew from a small outpost to a sprawling center that was used to train the counterterrorism forces of Afghanistan’s intelligence agencies.

Those forces were some of the only ones to keep fighting as the government collapsed, according to current and former officials.

“They were an exceptional unit,” said Mick Mulroy, a former C.I.A. officer who served in Afghanistan. “They were one of the primary means the Afghan government has used to keep the Taliban at bay over the last 20 years. They were the last ones fighting, and they took heavy casualties.”

Local Afghans knew little about the base. The compound was extremely secure and designed to be all but impossible to penetrate. Walls reaching 10 feet high surrounded the site, and a thick metal gate slid open and shut quickly to allow cars inside.

Once inside, cars still had to clear three outer security checkpoints where the vehicles would be searched and documents would be screened before being allowed inside the base.

In the early years of the war, a junior C.I.A. officer was put in charge of the Salt Pit, a detention site near Eagle Base. There the officer ordered a prisoner, Gul Rahman, stripped of his clothing and shackled to a wall. He died of hypothermia. A C.I.A. board recommended disciplinary action but was overruled.

A former C.I.A. contractor said that leveling the base would have been no easy task. In addition to burning documents and crushing hard drives, sensitive equipment needed to be destroyed so it did not fall into the hands of the Taliban. Eagle Base, the former contractor said, was not like an embassy where documents could be quickly burned.

The base’s destruction had been planned and was not related to the huge explosion at the airport that killed an estimated 170 Afghans and 13 American service members. But the detonation, hours after the airport attack, alarmed many people in Kabul, who feared that it was another terrorist bombing.

The official American mission in Afghanistan to evacuate U.S. citizens and Afghan allies is set to end next Tuesday. The Taliban have said that the evacuation effort must not be prolonged, and Biden administration officials say that continuing past that date would significantly increase the risks to both Afghans and U.S. troops.

Julian E. Barnes is a national security reporter based in Washington, covering the intelligence agencies. Before joining The Times in 2018, he wrote about security matters for The Wall Street Journal. @julianbarnes • Facebook


Farnaz Fassihi is a reporter for The New York Times based in New York. Previously she was a senior writer and war correspondent for the Wall Street Journal for 17 years based in the Middle East. @farnazfassihi
Posted by Steve Douglass at 7:59 AM No comments: