Since the  publishing of  Intercept: American Airlines Flight 2292 reports close encounter with unknown flying object, this journalist has been besieged with non-stop calls and emails mostly from media outlets wanting interviews.
It didn't take any time for the post to go global, especially with the help of Tyler Rogoway and The War Zone.
Tyler gets the credit with doing the leg work, taking the raw data and  leaning on American Airlines and the FAA to give up some information with the thing being that the issue here is not if it's a UFO but that it must be considered a threat to safe navigation of civilian and commercial aircraft.
At first American Airlines tried to deflect the incident saying as much and that they didn't know who made the radio report to Albuquerque Center but eventually being forced to acknowledge it was in their best interest to admit the incident took place and there is now an active investigation into what the flight officers on AA2292 saw last Sunday ripping across the skies of northwestern New Mexico.
Speculation on what it it was are being bounced around on chat boards and social media platforms, from posters running the gamut from rabid UFO true believers to more scientific and data based aeronautical experts, amateur plane spotters and internet space and aviation junkies (some self-proclaimed insiders who claim they know but would have to kill us if they told us ) but in spite of all that we don't have any concrete answers.
That said FOIAs have been filled, phone calls to all the military commands in the area, all denying they had anything flying that afternoon and as a result we are no closer to the truth.
In the middle of this flying circus one person persisted in getting in contact with me. He tried first through my employer, who gave him my cell phone number and email address, tried calling me  (which I bounced because they were from unknown callers) before  he finally catching up me at a rare down moment at my desk (at lunch time) one of the few quiet minutes I have had since this all began.
He then identified himself and told me his story of his encounter that was remarkably similar to the encounter AA Flight 2292 experienced but with lots more detail. He also told me he felt compelled to talk to me that since his encounter he's had to endure some skepticism from an industry where just talking about "UFOs" can get you labeled as half a bubble off plumb.
He also added that in aviation circles, when pilots are off work kicking back having a few beers and dropping their guard and talk, they trade very similar stories of encounters with flying wedge type objects crossing their flight paths and they are much more common than one would like to think. He said, "over the last few years something definitely odd is going on in our crowded skies and no one seems to want to acknowledge it."
"Carl" as I will call him  ( I chose to protect his anonymity not him) told me his story.
He was a corporate pilot flying above 50,000 feet over NW Texas on his way to North Carolina on a sunny day in Feb of 2018.
Unfortunately at the time of his encounter his co-pilot was "hitting the head" military talk for using the bathroom and as fate would have it that's when a wedge-shaped-object flew by the aircraft at high speed a few thousand feet above his aircraft. Carl got a good look at it. He described it as a highly swept triangular wedge with two winglets either side - more like wing tip canards. The shape was surrounded by a bright yellow halo-plasma like envelope so bright it stood out even in broad daylight.
His co-pilot returned and couldn't help but notice the look on "Carl's" face, white as if he had seen his life flash before his eyes. He told his copilot what he had seen and asked if he should report it to air traffic control. Worried about the safety of other aircraft on the same route they decided they had to. ATC asked for a description and heading and if they wanted to file a report. He said yes.
Right after his report he radioed to see if any other aircraft in the area had also seen the object, none had with some even jokingly ridiculing the sighting as "swamp gas - did you see little green men" etc.
Note here, pilots often use discrete frequencies to talk to each other most notably 123.450 MHz - an easy frequency to remember since it's unassigned and all one just has to dial in is: 12345.
Military pilots have similar channels like "WINCHESTER" MAGNUM, SHOTGUN" etc. - with them being 303.00 MHz (30/30) 351.700MHz (like the handgun 357 magnum) and 300.600 (SHOTGUN) thirty-ought-six.
To make my point and a long story short, as the War Zone has pointed out and as more pilots are seeing the media buzz that continues to grow around the encounter "Carl" encourages pilots to come forward. He says "Among pilots it's considered a dirty little secret we don't talk about officially but we do to each other."
Carl worries that some day there will be a mid-air collision with one of these objects and no one will literally know what hit them.
-Steve Douglass
Posted by Steve Douglass at 2:17 PM 2 comments:


On Sunday, Feb 21, just after 1:00 PM CST the author of this blog recorded off a radio scanner an American Airlines passenger jet reporting an unidentified object that flew close and just over the aircraft.

At approximately 1:19 CST on the Albuquerque Center frequency of 127.850 MHz or 134.750 MHz (recording wasn't frequency stamped) the pilot reported: "Do you have any targets up here?  We just had something go right over the top of us   - I hate to say this but it looked like a long cylindrical object that almost looked like a cruise missile type of thing - moving really fast right over the top of us."

According to Flight 24 and Flight Aware AAL 2292 was over the northeast corner of New Mexico west of Clayton, New Mexico. No reply was monitored by Albuquerque Center because local (Amarillo) air traffic walked on top of it. AAL 2292 was near flight level 370 (37k) at the time of the report.

No significant military aircraft presence was noted on ADS-B logs.

The aircraft  flew on to land in Phoenix, AZ.

Here's a link to the flight path of AAL2292: https://flightaware.com/live/flight/AAL2292

Links to audio for personal or news use only (not licensed for entertainment purposes):

This is a developing story and we will post more when we know more.

At this time, we do not have any indication the radio transmission was from the flight crew on board American Airlines Flight 2292 on Feb. 21.

NOTE; The entire intercepted aviation monitoring recording (including Flight 2292 giving their call sign before the transmission) can be downloaded HERE for analysis. Flight 2292's call begins at 1:13:09

ABOUT THE AUTHOR:
Author, investigative journalist, technologies expert, and self-avowed "Stealth Chaser," Steve Douglass is considered by many an icon in the esoteric-yet-fascinating field of military monitoring.By day, Douglass is the chief photojournalist for ABC 7 in Amarillo, Texas. His communications monitoring expertise has helped break both national and international news stories for ABC News, CBS News, CNN, the Associated Press and others.He was one of the first to photograph the tragic re-entry of the Space Shuttle Columbia as it streaked to its doom over Texas and alerted the world’s press when a Russian submarine sank in the Atlantic due to a fire in a missile compartment.On 9-11, Douglass monitored the frantic aero communications of that tragic day and kept the press informed of the FAA’s and the military’s desperate attempts to distinguish hijacked aircraft from those packed with innocent commuters.As an author, Douglass' first book, The Comprehensive Guide to Military Monitoring, is considered by many the bible on the art of intercepting military communications.He has also written many feature articles on emerging stealth technologies, aviation, astronomy, and cutting-edge technologies for Aircraft Illustrated (UK) Popular Science Magazine, and has been a behind the scenes contributor to Aviation Week & Space Technology Magazine, the "must read" publication of the defense and aviation industries.Douglass was also contributing writer for Monitoring Times and Popular Communications, magazines devoted to radio monitoring hobbyists.
In 1998 "Dreamland", author Philip Patton's exposé on Area 51 was released with an entire chapter devoted to Douglass. Douglass also helped Patton fact-check Dreamland.
In his spare time, Douglass is an avid tornado chaser and storm spotter volunteering for the National Weather Service. Recently Steve was engaged as a location scout and researcher for Florentine Films (Ken Burns) on “The Dust Bowl" that aired on PBS in 2012. In 2013 he became a full-time photojournalist for KVII TV.Currently Steve is working on a sequel to, “The Interceptors Club and the Secret of the Black Manta"  a novel based on his "stealth chasing" experiences.
MONITORING POST PHOTOS: 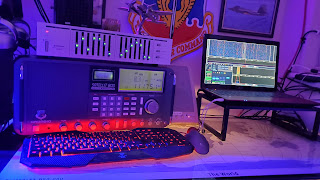 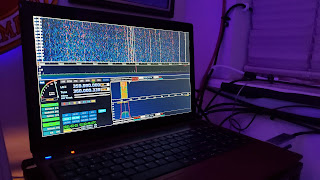 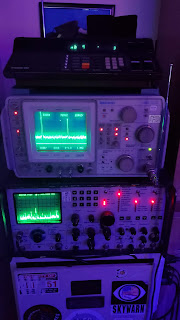 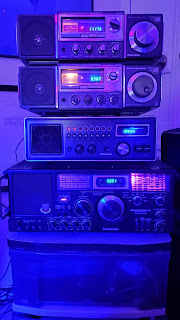 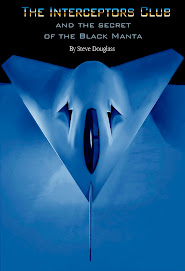 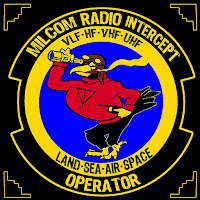